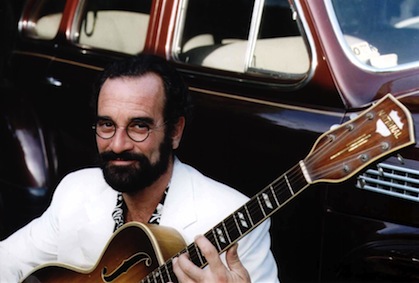 Bob Brozman, a renowned guitarist who focused on the resonator and other instruments used to make Hawaiian, Indian, African, Japanese/Okinawan, Caribbean, and American roots blues, was found dead at his home in Santa Cruz, California, the evening of April 23. He was 59 years old.

Brozman was born in New York. As a child, he became fascinated with music and was heavily influenced by an uncle who ran a club in the city that allowed performances by musicians both black and white. He took up the guitar at age six and at 13 discovered the National metalbody resonator. He went on to study music and ethnomusicology at Washington University, focusing on early Delta blues. His studies led him to travel widely throughout the American south and publish several articles while building a collection of 78-rpm records and along the way becoming an authority on historical Hawaiian music. He issued his first album in 1981 and recorded more than 30 titles total, including 14 solo albums and several collaborations. He also produced music, including five reissue albums on the Rounder and Folklyric labels.

Brozman was also an authority on National guitars, and had a substantial collection of the company’s instruments. Inspired by a letter from resonator developer John Dopyera, in 1993, Brozman published The History and Artistry of National Resonator Instruments. He later became adjunct professor at Macquarie University, in Australia, where his lectures focused on ethnomusicology.

As word spread of Brozman’s passing, key figures in the vintage-guitar industry shared thoughts via personal networks and social media.

“Bob was a great person, musician and friend to the heritage of styles of the 1920s and ‘30s, and also to both the National Reso-Phonic and the Santa Cruz Guitar companies,” said Stan Jay, proprietor of Mandolin Brothers, a vintage shop on New York’s Staten Island. “He was always willing to share information and advice. He was, in every way, a true professional.We will greatly miss him.”

He is survived by his wife, Haley, and a daughter, Zoe.