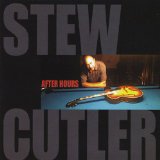 Cutler’s latest release perfectly navigates that land between jazz and blues that puts it firmly in both camps. It’s an organ-trio record for the most part, with Cutler’s lead and rhythm guitar parts creating nonstop grooves. That’s evident from cut one, “No Greater Love,” with his jazzy jabs and occasional octaves displaying an affinity for Wes Montgomery and Grant Green. Before the tune is over he’s thrown in some quiet, yet dazzling, sweeping licks and then darts in and out of the changes with ease. His comping behind Chip Crawford’s organ soloing is subtle but always felt, driving the tempo.

That’s one of several covers here that range from classic soul to bop. A seven-minute take on “Just My Imagination” waits until halfway through before his percussive soul soloing starts, cutting through chorus after chorus without ever repeating himself or showing off, while staying true to the soul of the Temptations’ original. He even throws in a tasty chord solo that jazzily plays off the song’s original changes. In the only use of an effect on the record, the rhythm guitar is a perfectly placed set of chords through a wah. Cutler also tackles Charlie Parker’s bop excursion “Au Privave,” showing no problem getting through the changes with a great right hand, some perfectly executed bends, chords, and octaves.

Most noticeable in his compositions is his inherent feel for the soul/ jazz vein. It’s obvious that he’s got the chops to do whatever he wants, but the soul exhibited makes it clear where his love lies.