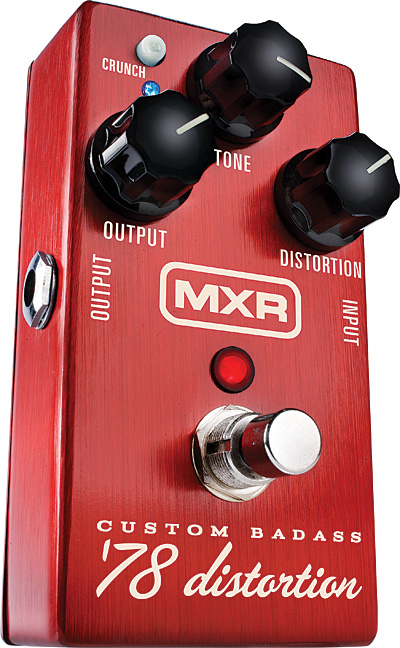 Custom Badass is a new division of MXR that offers the company’s engineers’ hot-rodded takes on popular designs.

Packaged in MXR’s classic small housing, the ’78 Distortion is a bit lighter and has a more squared look compared to most MXR units. It has 1/4″ in/out jacks, a true-bypass stomp switch, and a 9-volt DC jack. Controls are for Output, Tone, and Distortion, and there’s a mini-switch labeled Crunch. This additional switch opens up the harmonic content of the pedal via switching the type of clipping used in the gain stages.

Using a reissue Gibson Les Paul and a Fender Telecaster plugged into a ’65 Fender Deluxe Reverb and Dr. Z Carmen Ghia, chords played at low drive levels offered impressive clarity, with a nice bit of crunchy sizzle on top. Dialing up amp volume, sounds went from jangly grit to nice power-chord tones and cutting lead tones that were pleasing to the ear.

Combining the Deluxe with the Les Paul, the character of the pedal becomes more evident, and it’s easy to dial in various crunch tones, and wail on oft-played classic-rock tunes. No matter the guitar or setting, the pedal is a well-reasoned machine.

Engaging the Crunch control adds openness and presence to the tone. MXR says the button changes the LED- and diode-clipping stages, causing the tone to be more open/less compressed. All of the controls on this box are well-conceived. Tone is a useable treble cut/boost that allows for dialing in dark or clear tones, no matter the guitar. The Output can more than adequately compensate for low drive settings, while the Distortion knob can take it from a light crunch to heavy full-on saturation.

Being mass-produced, the ’78 Distortion does forsake boutique touches in favor of board-mounted jacks, pots, and switches. But that doesn’t change the fact it’s a sweet-sounding pedal.