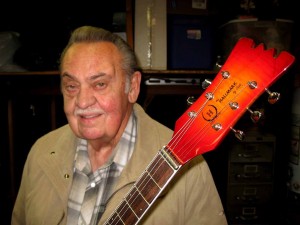 Guitar builder Bill Gruggett passed away October 7. He was 75 and had been battling health issues.

In the ’60s, Gruggett (VG, February ’97) had affiliations with the Bakersfield-area Mosrite and Hallmark guitar companies, and in ’67 established his own brand; the Stradette was an unusual series of instruments influenced by thinline electric guitars and violins. He continued luthiery after the company folded in ’68, and at the time of his death was working as a builder for the modern Hallmark, which has made reissues of the Stradette guitar. A profile of a ’67 Stradette bass was published in the July ’12 issue of VG.