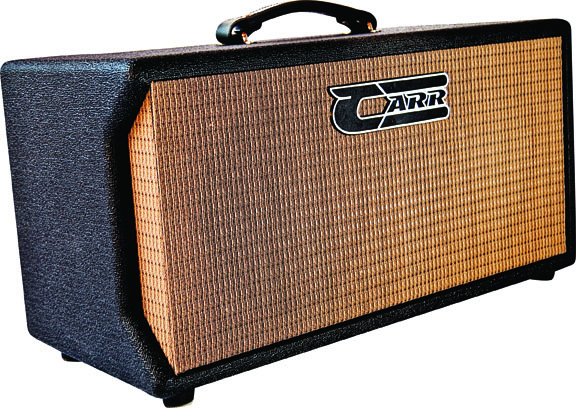 Steve Carr made a name for himself building fine amplifiers such as the Slant 6V and the Rambler. His Artemus model used four EL84 tubes, but was not a subtle variation on a classic design, but rather offered a powerful blend of Dick Denney, Leo Fender, and Steve Carr.

Though the term “American meets British” is overused in the amp biz, the Artemus was essentially an AC30-flavored design with a touch of blackface Fender. Its EL84 power section is accompanied by two 12AX7 tubes in preamp, a 5AR4 rectifier, and an Eminence driver.

Top-mounted knobs control Volume, Bass, and Treble and rest on the panel alongside switches labeled Edge (bright and upper-mid boost), Mid (midrange), a selector that changes the amp’s output from 15 watts to 30, as well as switches for Standby and On/Off. A bias pot is mounted to the underside of the chassis.

We tested the amp with a recent Gibson ES-335 and a reissue Fender Telecaster. With both, the amp’s tone controls had a very useful range; the Edge and Mid switches worked very well for tweaking tone depending on each guitar’s pickups. With the Tele, we switched off the Edge, turned on the Mid, dialed in a bit of Bass, cut the Treble, and set the Volume halfway. The result was an outstanding, modern Tele tone in the 15-watt setting that simply begged to play Mike Campbell/Heartbreakers-style licks. Attack was snappy, with plenty of growl. At lower volume, the Artemus cleaned up well.

Plugging in the 335, we flipped the Edge switch on and turned off the Mid. We also lowered the Bass and switched the wattage to 30. With the guitar’s Volume control turned up all the way, it was easy to get grit from the amp, even at lower volume. For most, this is a plus, but a jazzer might need a bit more true clean tone. Turning up brought more dirt and sustain to the fore, but engaging the Mid and switching the output back to 15 watts took the Carr to all-out dirtfest with the 335’s humbuckers; power chords, double-stops and single-note lines produced smiles all around. One especially notable aspect of the Artemus’ tone is its acoustical spread – sound from the cab was less directional than we typically hear from a 1×12″, due to its larger size, material, and engineering. No matter the setting or guitar, the amp filled the room with stellar tones.

Unlike most EL84-powered combos, the Artemus is very humbucker friendly – deliciously gritty. For the rock-and-roll Tele player, it’s hard to beat. The amp is well-conceived, highlighted by its cab design, and everything about it, including fit and finish, say “quality.”