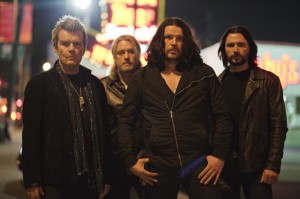 The Cult have scheduled appearances on two upcoming television shows. The first happens this Saturday, May 12, on VH1 Classic’s  ”That Metal Show,” which airs at 11 p.m. Eastern. The following Friday (May 18), the band will perform a track from its new album, Choice of Weapon, on ABC-TV’s “Jimmy Kimmel Live!” as well as one classic song. In addition, the band will play three more songs that will be available on the show’s website. Jimmy Kimmel Live! airs at 12 a.m. Eastern and Pacific, 11 p.m. Central.

The Cult’s 20-date 2012 North American Tour kicks off May 25 in San Diego. A three-week European trek begins in Belgrade June 28.