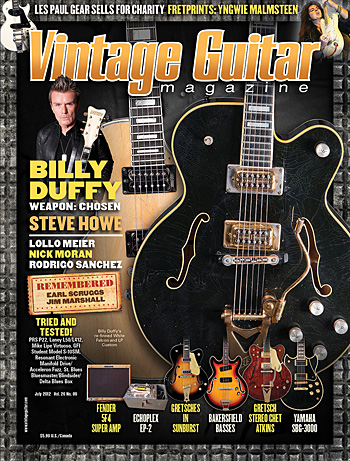 As his peers in other rock bands of the ’80s donned superstrats, Billy Duffy stuck to what worked for him – a Gretsch White Falcon. We ask him why, and talk about the new album from The Cult. Then, we talk about why a Gretsch 6120 in sunburst is such a cool diversion, as is the super-rare Gretsch Stereo Chet. Speaking of funk(y), have you ever heard of the Epcor  brand? How about the Gruggette Stradette? If not, you’ll want to read up on these two unusual basses, and check out Michael Wright’s rundown of the Yamaha SBG-3000, as well as Michael Dregni’s look at the Echoplex EP-2. For shredders and those otherwise interested, Wolf Marshall lays out some background and three key licks from the catalog of Yngwie Malmsteen.

We also talk new music with Steve Howe, Nick Moran, Lollo Meier, and Rodrigo Sanchez, take a look at the forthcoming sale of guitars and gear from the estate of Les Paul, and remember the greatness of Jim Marshall and Earl Scruggs.

Billy Duffy
Weapon: Chosen
As his peers in rock bands of the mid ’80s fell in line to play modified “superstrats,” he stuck with his trusty Gretsch White Falcon as his band, The Cult, scored international fame. Ironically, though, the guitar was at first more a solution than a choice. By Ward Meeker

The Gretsch Stereo chet
Gretsch caught audio’s latest technological wave in 1958, introducing stereo output on two production models. Curiously, it did not offer it on its most popular guitar – the Chet Atkins 6120. But that didn’t stop one guitarist from custom-ordering this in one ’63. By George Gruhn and Walter Carter

The Yamaha SBG-3000
Yamaha introduced its first SG model in late ’73, and a bewildering variety of them appeared over the next decade, including this upscale rendition introduced in ’82, with similar looks, but significant changes under the hood. By Michael Wright

Basses From Bakersfield
The history of guitar manufacturing in the Bakersfield area of California includes names like Mosrite, Hallmark, and Standel. Two of the more unusual were the Gruggett Stradette and Epcor. By Willie G. Moseley

The Fender 5f4 Super amp
Amp-head folklore says the 2×10” tweed Super Amp of the late ’50s was Leo Fender’s favorite among his tube-powered creations of the time. Here’s a close look at why. By Dave Hunter

The Echoplex EP-2
With its arrival circa 1959, tape echo became accessible to the masses. Suddenly, any player could rock like Elvis or take sonic adventures like those of Led Zeppelin or Pink Floyd. Today, its sounds are still the subject of heavy experimention. By Michael Dregni

Steve Howe
Yes: In The Present
By Oscar Jordan

Nick Moran
All About the Band
By John Heidt

Shop of Hard Knocks
Inlaid Upgrade
By Will Kelly

Check This Action
Funeral for a Friend
By Dan Forte