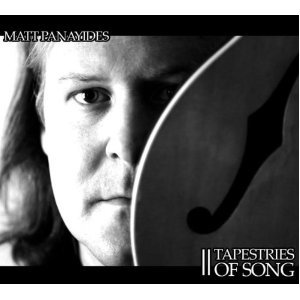 With his new album, Matt Panayides makes a case for being mentioned among the best jazz traditionalists playing guitar these days. Boppers like “Seoul Soul” show how he easily navigates complex changes while soloing. His accomplice is saxophonist Rich Perry, and Panayides lays down the perfect layer of changes for Perry to do his thing.

The guitarist also shows he’s at home with contemplative pieces like the beautiful, mid-tempo “Out of My Hands,” where he weaves a nice, imaginative solo. The ballad-chord work in the ﬁrst 90 seconds of “Different Place” gives an idea just how well-formed are Panayides’ harmonic ideas. The song shifts to a light swing where he and Perry trade gorgeous solos. “Why Bail Them Out?” is a funky tune with a snapping beat and bop changes. While his soloing is on-the-money, Panayides truly shines with funky
comping underneath Perry’s solo. “Sketch” clocks in at almost 10 minutes, but the ﬂoating feel and soulful melody, coupled with great playing by all concerned, ensure it’s never boring. In its midsection, Panayides and Perry play a fascinating game of chase while the band’s well-deﬁned dynamics are showcased. Panayides, Perry, bassist Steve LaSpina, and drummer Dan Weiss have fashioned a record of great songs, great playing, and empathetic musicianship.