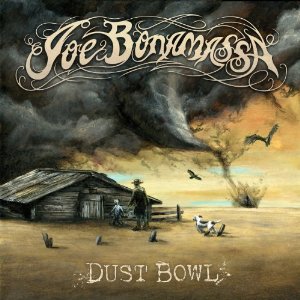 From the opening notes of “Slow Train” to the echo of the last note of “Prisoner,” modern blues guitarslinger Joe Bonamassa’s Dust Bowl is a masterpiece.

Bonamassa has released 11 previous solo albums and was crowned Billboard’s Blues Artist of 2010. But many blues-guitar fans have been hip to him for far longer.

Dust Bowl not only proves that Bonamassa is at the top of the new generation of bluesmen, but the album is remarkable for the variety and depth of its music. “The Last Matador of Bayonne” is a slow, soulful piece, while “Tennessee Plates” is pure Nashville, grouping him with Vince Gill and John Hiatt on a country anthem worthy of a beer-can toast.

That’s not to say that Bonamassa’s trademark blues-rock is absent. He’s merely stretching out.

The album-opening “Slow Train” is a killer. Beginning in a sonic wail of guitar, the song builds into a stunning series of riffs and howling solos. It’s part Muddy Waters, part Cream, all Bonamassa.