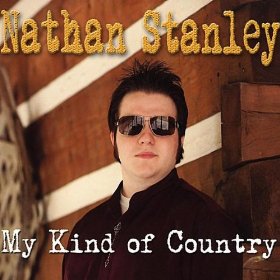 On the cover of My Kind of Country, Nathan Stanley looks a bit like Elvis, with big sideburns, slicked-back hair, and shades. But unlike some Las Vegas clone, Stanley was born into bluegrass/ country royalty – he’s the grandson of Dr. Ralph Stanley – and served time with his grandfather’s band, The Clinch Mountain Boys. His latest album salutes traditional country music and features a plethora of Opry superstars.

Accompanied by the likes of Del McCoury, Ricky Skaggs, Little Jimmy Dickens, Marty Stuart, Connie Smith, Larry Sparks, Stella Parton, Patty Loveless, John Anderson, Vince Gill, and of course Dr. Ralph Stanley, Nathan Stanley soldiers his way through 22 country classics. From “Love’s Gonna Live Here” to “A Satisﬁed Mind,” he enshrines all the songs in arrangements that are half Chet Atkins’ Nashville sound and half Buck Owens’ Bakersﬁeld twang. Most of the songs begin with Stanley singing lead, his voice smooth as a baby’s cheeks, his delivery reminiscent of Willie Nelson.

Stanley isn’t afraid to mess with classics. He does a good job bringing “Act Naturally” back to its roots, while his version of “Long Black Veil” is very unlike Lefty Frizell’s original – he even changes the chord progression. “I’m so Lonesome I Could Cry” gets s-t-r-e-t-c-h-e-d like homemade saltwater taffy, while “May the Bird of Paradise Fly Up Your Nose” gets a hot-country treatment that works nicely. Maybe there’s something to that genetics thing…