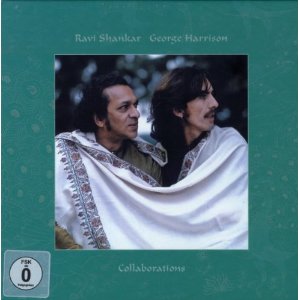 After George Harrison played the simple hook to the Beatles’ “Norwegian Wood” on sitar, then studied with Ravi Shankar, Indian music became all the rage, with Shankar its rock star.

Harrison signed Shankar to his Dark Horse label in ’73, and the following year produced Shankar Family & Friends, mixing Indian classical musicians with jazz and rock players, such as Ringo Starr, Billy Preston, Jim Keltner, Tom Scott, Emil Richards, and Nicky Hopkins on Harrison’s “I Am Missing You” and music by Shankar, including the three-part, 30-minute “Dream, Nightmare & Dawn.” Harrison also took his friend and mentor on tour in ’74, with Shankar’s orchestra opening for Harrison’s Dark Horse band.

The limited-edition boxed set Collaborations’ three CDs present Family & Friends with the pair’s other Dark Horse releases – the studio recording of The Ravi Shankar Music Festival From India (1976) and Chants Of India (1997). Also included is a DVD of a 1974 Royal Albert Hall performance of Festival – the first event organized by Harrison’s Material World charitable foundation, featuring a 17-piece Indian classical ensemble as well as a solo performance by Shankar with Alla Rakha, his tabla player since 1962.

Unfortunately, over the years, much of the original footage from the concert (featuring amazing playing by such Indian luminaries as L. Subramaniam on violin and Sultan Khan on sarangi) was misplaced or destroyed, but the restored surviving footage is presented for the first time. The complete audio, however, was preserved, and is included with the existing footage as well as in a separate audio section of the DVD.

A bonus section shows Shankar’s daughter, sitar star Anoushka, remixing the concert in a San Diego studio, under the watchful (and joyful) eye of her 90-year-old father, along with George’s widow, Olivia.