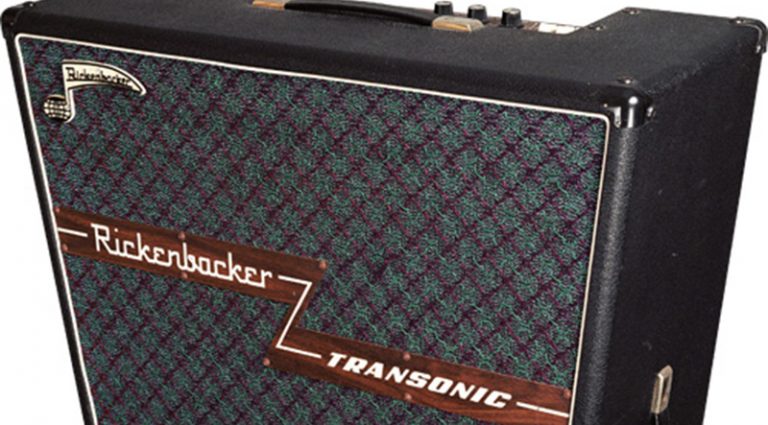 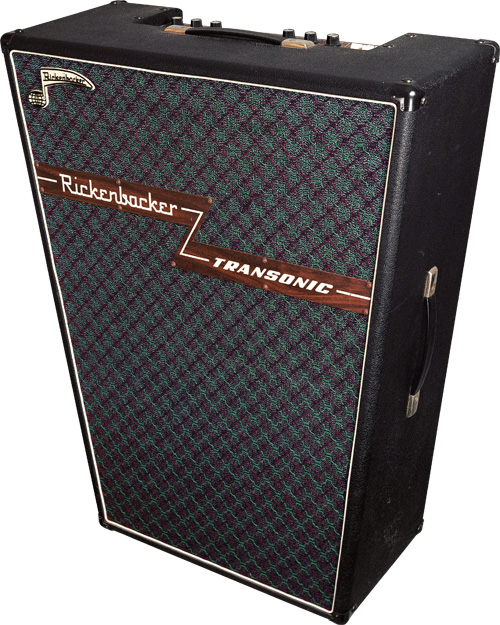 A major artist’s endorsement of a piece of gear is often seen as a springboard to that product’s success, or at least serves as a footnote that has helped to keep it in the history books. Having graced the U.S. tours of Led Zeppelin, the Jeff Beck Group, and Steppenwolf in the late ’60s, and Cheap Trick after, the Rickenbacker Transonic series should have had its shrine in the annals of geardom secured, yet this wild line of hulking solidstate amplifiers has all but vanished from memory. Examples exist as prized pieces in the collections of a handful of amp-o-philes, certainly, and are still gigged out by a few dedicated enthusiasts, but the name has little to show for itself against the Fenders, Marshalls, Voxes and Boogies of the world, and even the solidstate Roland Jazz Choruses and Polytone Brutes. What went wrong?

According to their designer, Bob Rissi, “They were just so expensive, most artists couldn’t afford to buy them. You could buy three Fender Twin Reverbs for the price of a Transonic TS200.”

The fact that Jimmy Page and John Paul Jones left most of their Transonics in the U.S. after returning to England in ’69 at the end of the tour also leads some to assume they weren’t thrilled with the Rickenbackers. No doubt the Marshall head and cab ultimately suited him better live, and a little Supro and others did the trick in the studio, but Page had already recorded the main guitar part to “Heartbreaker” on one of his Transonics, and did purportedly retain another in his home collection for many years. In fact, most players who have come close enough to a rare Transonic to get their jack into one will tell you that they sound strikingly good (occasionally with the caveat “for a transistor amp”). Truth is, the occasional dissing of these rigs is probably symbolic of the acceptance of the rock world at large of the solidstate amps that abounded in the late ’60s, which is to say, the near-wholehearted rejection of those amps once they’d given them a whirl. Time and time again the manufacturers stumped up a fleet of impressive-looking solidstate amps for a big tour, only to have said artists declare that they “don’t break up” like the tube amps they already knew and loved. In the grand scheme of things, though, Rickenbacker’s Transonics were a cut above the flawed first-generation Fender and Vox efforts and others that forged the dismal early reputation for the breed, and deserve some love here to acknowledge this.

The big amps that most of our name-checked artists toured with haled from the TS200 series of 200-watt head-and-cab rigs, but our subject this week is the lesser seen 100-watt TS100 combo. The preamps were the same on each, and they differed only in their power amps, speakers, and cabinet configurations. Having contributed to designing Fender tube amps in the early ’60s (as well as enjoying a brief stint away to design a rare line of tube amps for Rickenbacker in 1963-’64), Rissi was in on Fender’s big push toward solidstate in the mid ’60s, which resulted in the company’s ill-received first run of tranny amps. These were given model names identical to many of their tube-loaded predecessors, which, apparently, Fender thought they would eventually supersede entirely. “I was unhappy with Fender marketing the solidstate amps to replace the tube amps, though,” said Rissi. “Because rock and roll was still big, and solidstate amps wouldn’t distort well, even if you turned them to 10.”

Happy to seek his fortunes elsewhere, Rissi was hired for a second time by Rickenbacker’s Francis Hall, but this time to work on a new type of solidstate amplifier aimed at the professional guitarist. “I wanted to make these solidstate amps sound more like tube amps. I put the transistor circuitry in similar to the way a tube amp is made. They were not direct-coupled, like most solidstate amps of the time, but were capacitively and non-direct coupled, so the circuit worked the way a tube amp circuit works. That’s where the warmth and the tone came from, and that’s why so many big groups liked them. They were well-made, too. Every so often I have to work on one, and there usually isn’t much wrong with them other than needing a filter cap or something. The parts we used in those amps were real high-quality, usually Motorola or RCA, and we used Schumacher transformers.” 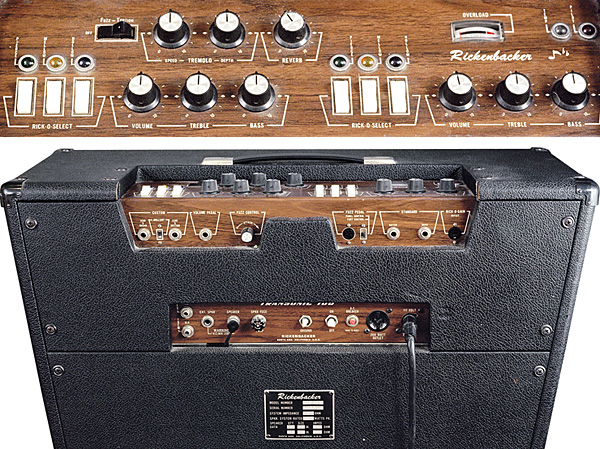 Our TS100 has two channels – Standard and Custom – each with its own Volume, Treble, and Bass controls. In addition, each carries a trio of big, white “Rick-O-Select” switches with different-colored indicator lamps for each of three voicing modes – Pierce, Mellow, and Hollow. Just be sure to pop in those earplugs before you flip on that “Pierce” setting, will you? The Custom channel also included Reverb and Tremolo, and another clear nod to tonal fashions of the times, a Fuzz-Tortion circuit. According to Rissi the fuzz circuit wasn’t something he was fond of (“I prefer natural overdrive…”) but fuzz was the sexy ticket of the late ’60s, and Rickenbacker head Frances Hall wanted it in there. As it turned out, a lot of players found it an effective fuzz tone, and several even tracked down Rissi in later years to have him put the circuit in a pedal configuration. The TS200 also included a stereo preamp, so that each channel could be split to a separate power amp, producing a stereo signal for Rick’s “Rick-O-Sound” guitars with the use of a second powered speaker cab. The piece de resistance topside, however, has to be the big power meter with “overload” light.

More than anything going on inside the chassis, though, the Transonics cut their dashing figures thanks to the large, top-heavy-looking trapezoidal cabinets. Made from solid pine and carrying either a pair of 12″ Altec 417s or white-frame British-made Rolas in the TS100, or four 12″ speakers or two 15s and a horn in the TS200, these made for a heavy package, and contributed to the hefty price tag; a whopping $1,345 for the flagship TS200 in 1973 shortly before the demise of the series.

Eager to build an amp working guitarists could actually afford, Rissi left to start his own company, Risson Amps, where he sold mostly tube amps, but a few solidstate models too, to several major-name players – Joe Walsh, Nikki Sixx, Rick Vito, and Lita Ford among them – before sidestepping into the computer industry in the early ’80s. Now in retirement, Rissi still builds the occasional tube amp in his home just a few blocks from the location of the old Fender factory in Fullerton, California, and currently offers the compact Marvell model, hand-made from mostly new-old-stock components that have lain in storage since his first go-round as a designer. As for the Transonics themselves, plenty of the relatively few made are still out there, and still rockin’ when called upon.