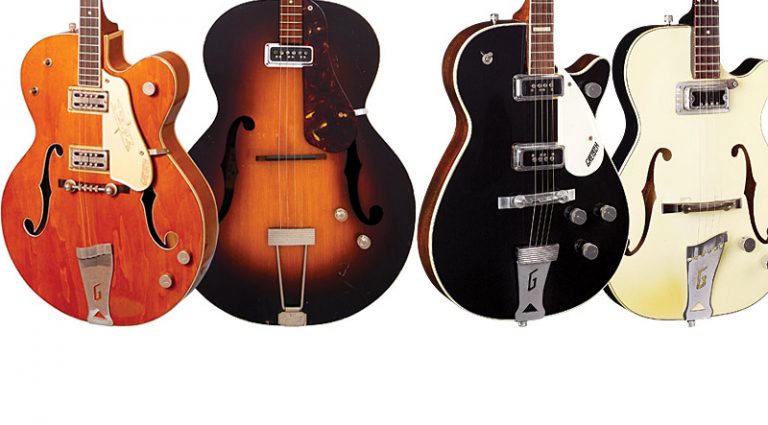 In the 1950s and early ’60s, the electric guitar was establishing itself as a key part of the new voice of popular music. Amplification provided its volume, and innovative artists were pushing the envelope of sound that could be offered by six strings. So it’s interesting that in a time referred to in retrospect as the “Golden Era” of the electric guitar, major manufacturers were also producing similar electrified instruments with only four strings.

Tenor guitars initially became popular in the 1920s when musical tastes motivated a move by many musicians away from the banjo, toward the guitar. The four-string tenor made for an easy transition, as it could be tuned like a tenor banjo – CGDA fifths. Into the early ’30s, the guitar was primarily a rhythm instrument. Sonically challenged within the ensemble format of a large band, it was typically relegated to the percussive accompaniment of other lead instruments. However, even before the mid-decade advent of amplification, guitars were being pushed into a greater role with virtuoso artists such as Eddie Lang, Lonnie Johnson, and Django Reinhardt mastering the complexities of the acoustic. Likewise, the Delmore Brothers, a pioneering country music duo comprised of Alton on an acoustic six-string and Rabon on a Martin O-18T, were lead instrumentalists in that genre, introducing a country-boogie beat and inspired acoustic solo work that ultimately earned them induction into the Country Music Hall of Fame in 2001. 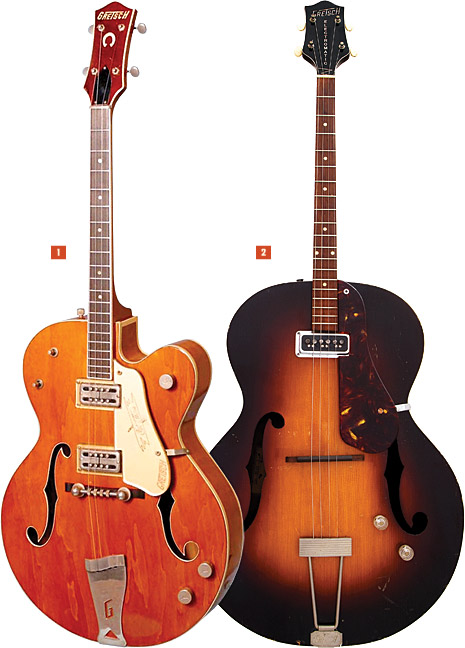 1) A bit of a surprise that Gretsch made Chet Atkins 6120 hollowbody in four-string tenor format. Perhaps the only one of its kind, this ’58 example was the first guitar in the 100-unit 6120 model batch #284xx. The four-pole Filter’Tron pickups were specifically made to accommodate the format. The dot fretboard markers are pedestrian compared to the neo-classic markers on the standard 6120, and the G tailpiece and modified space-control bridge were practical departures from the six-string. Photo courtesy of George Gruhn.

2) Replacing the 6185 model late in 1953, the 6182 model (ultimately named “Corvette”) was almost identical. This early example belongs to the last batch (#126xx) produced before the advent of the adjustable truss rod (with headstock-located cover). This is also the last batch labeled with the dual model stamp. This specimen’s model stamp shows the typical designation of 6182-3 stamped in ink, but also has a “T” suffix written in pencil. It has a standard six-pole DeArmond Dynasonic pickup, and all the other features are consistent with the conventional six-string Corvette. Several of these have surfaced in the four-string tenor orientation, likely one-off custom orders. Photo courtesy of Steve Wilson.

By the ’30s, many major guitar manufacturers had started producing standard and custom-order tenor versions of their popular six-string acoustic guitars. When Gretsch introduced a line of self-branded acoustic archtops in 1933, it included a four-string tenor (Model 240) in its American Orchestra lineup. Not big sellers, they nonetheless filled a relevant niche. Interestingly, in a circa-1936 Gretsch brochure is a notation that pledges, “Any standard model of Gretsch guitar can be duplicated in tenor style… at no increase in price.” This explains why some Gretsch tenor acoustics from the ’30s have surfaced with different features than the standard Model 240. Even more impressively, the brochure promises “…delivery in three weeks from the date of order.” 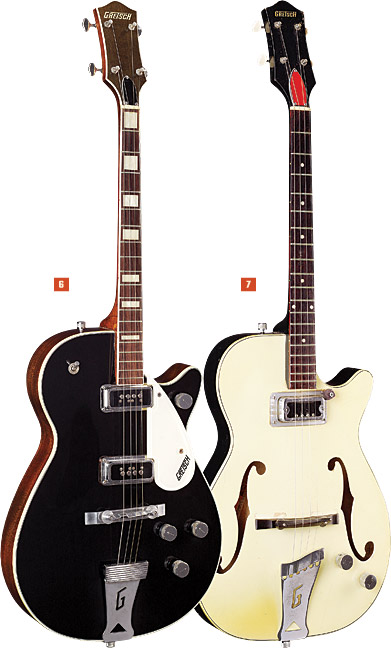 6) This example is from the latest documented mini-batch of Duo-Jet tenors residing in the #156xx batch, from 1955. It displays the arrow-top control knobs and teardrop-style pickguard. The tailpiece and bridge are not original. Not all tenor Duo-Jets have four-pole DeArmond Dynasonic pickups like this. It’s unclear why some electric tenors had these pickups while others had the standard six-pole variety. Photo courtesy of Fred Gretsch.

7) This 6115 Rambler from the #379xx batch is an interesting example of the four-string tenor adaptation of an uncommon Gretsch model, with four-pole Hi-Lo’Tron pickup. The red truss rod cover is original, and this model typically displays a matching red G on the tailpiece. The pickguard is missing. Photo courtesy of Fred Gretsch.

As the ’40s loomed, Gretsch upgraded its guitar offerings, debuting the Synchromatic line of acoustic archtops in 1939. Unlike the previous product line, comprised of midrange variations on the Gibson L-5 archtop, the Synchromatic guitars were distinct, with the higher-end models sporting exotic “cats-eye” soundholes and art deco design motifs. Though the tenor was by then fading in popularity, Gretsch continued to produce the periodic Synchromatic-based tenor. On page 61 of Tony Bacon’s The History of the American Guitar is a photograph of a natural-finished 17″ Synchromatic tenor with cats-eye soundholes. Manufactured in 1953, it was part of 50-unit group (batch #112xx) of six-string Constellation archtops (model 6030-1), all featuring conventional f-holes, confirming this cats-eye tenor as a special-order instrument. This guitar, electrically enabled by the addition of a DeArmond floating pickup, is also a rare example of a Gretsch cats-eye acoustic archtop possessing the single-cutaway body.

One notable jazz artist who by 1940 had embraced the electric tenor was Lloyd “Tiny” Grimes. Known for backing up Art Tatum, Charlie Parker, Billy Holiday, and others, Grimes was influenced by the great Charlie Christian and is remembered for developing a swinging approach to the instrument. This characteristic sound, along with his inclusion as a co-headliner at Alan Freed’s Moondog Coronation Ball in 1952, resulted in some attributing him credit for the invention of an early rock-and-roll sound.

By the ’50s, popular music had evolved and four-string tenor guitars were no longer a standard catalog item. However, the latter decade saw a resurgence of interest in the four-string format as a result of the emergence of Nick Reynolds, guitarist for The Kingston Trio and devotee of Martin tenor acoustics. Reynolds played in DGBE (baritone ukulele) tuning, typically with a capo. And others followed as folk gained popularity.

The mid ’50s represented the heart of the Gretsch electric guitar legacy, and the company would contribute innovation, style, and unique sonic attributes with the guitar models it introduced over the next 10 years. Simultaneously, the six-string electric guitar was rapidly maturing into the most important musical instrument of the 20th century. So it’s a bit ironic that, considering the expansion of its electric guitar line to include some of the most distinctive models of the day, Gretsch was still willing to produce the periodic four-string deviant.

Interestingly, the competition was doing the same; Gibson had been producing the ETG-150 model as a standard tenor electric archtop option since 1937, but other well-known Gibson electrics have surfaced in the tenor format, including anomalous specimens based on the ES-175, ES-5, and ES-330. Gibson solidbody tenor examples of the Les Paul Special and SG-Standard have also been documented. Epiphone and Guild were likewise reported to have created four-string tenor examples of some of their stalwart electric six-string models, as well.

The Gretsch factory is known to have applied the four-string tenor format to a number of its early Electromatic guitar models of the 1950s. Examples of tenor counterparts to the models 6185 (Electromatic), 6182 (Corvette) and 6189 (two-tone finished Streamliner) have all been documented. Likewise, the Anniversary models have been used in the creation of four-string versions of the instruments. In each case, it appears the resulting guitar was a special order, or one-off production example. Gretsch tenor models are usually associated with a typical batch (50 or 100 units) of standard six-strings of the same model, not in conjunction with other tenors.

The exception to that rule appears to be with the application of the tenor format to the Duo-Jet electric solidbody. In this case, research confirms that several small “mini-batches” of four-string Duo-Jets (sometimes with the model designation of 6127, other times with the standard 6128 stamp on the label) were manufactured in the 1954/’55 model years, each in a larger batch of six-string Jet guitars. An educated guess might be that these mini-batches were on the order of 10 guitars each. It is not clear why Gretsch produced multiple Duo-Jet tenor guitars, but they are present in the March, 1954, price list at a suggested retail price of $230, consistent with their six-string counterparts. Other Duo-Jet tenors have surfaced from subsequent model years, including from batches #294xx (’58), 305xx (’59), and 399xx (’60). On page 150 of Akira Tsumura’s Guitars, The Tsumura Collection is a photo of a ’61 (or later) Duo-Jet tenor with the double-cut body the Jet line inherited that year. Each of these post-’55 tenor examples appears to be a custom order or one-off rather than from a mini batch.

One special-order tenor described by Dan Duffy, Gretsch quality manager from 1957 to 1970, is a late-’50s four-string tenor Duo-Jet requested by musician Remo Palmari for presentation to radio/TV talk-show host Arthur Godfrey, who was known for playing a four-string baritone uke.

As the mid ’60s were irrevocably impacted by the British invasion and the Beatles, the rock and roll train was at full throttle. George Harrison’s high-profile use of several Gretsch electric six-string models resulted in an explosion in the popularity of Gretsch electric guitars, and the four-string tenor format was overshadowed, if not abandoned altogether by the company, and Gretsch was sold to the Baldwin Piano Company in the summer of 1967. There have been tenor electric examples documented from that era, but they are exceedingly rare, and almost certainly custom orders. No examples of Gretsch electric tenor guitars have surfaced from the ’70s.

More than a half-century after Gretsch’s golden era (1953 to ’65) began and the electric tenor guitar was popularized, these quirky instruments are found in the collections of musicians and vintage-guitar enthusiasts who play music in a style that accommodates the tenor. Not many contemporary musicians play them, though there has been a minor resurgence of interest over the past few years.

Most Gretsch electric tenors were apparently special-order items, so it’s impossible to determine exactly how many were produced in Gretsch’s Brooklyn factory. This dilemma is compounded by the fact Gretsch records were lost to fires in the ’70s, leaving the precious few surviving electric tenors as the only evidence of their creation.

Edward Ball is the author of  Gretsch 6120… The History of a Legendary Guitar (Schiffer Books). For more on the style, visit vintagetenorguitars.com.