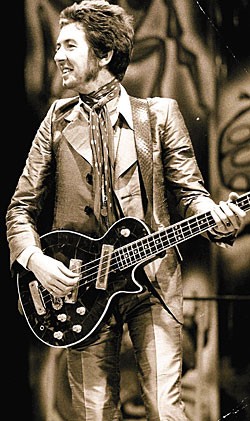 The quote that opens , the long-overdue documentary bio of the late Ronnie Lane, is a pretty strong indicator of his place in the rock pantheon. “There were so many things I got from Ronnie Lane. How to dress, how to view life,” says no less than Eric Clapton.

Lane was a founding member of two of Britain’s most influential bands of the 1960s and ’70s, the Small Faces and then Faces, but because he walked away from pop stardom at the height of the latter’s popularity, he’s far from a household name, particularly to Americans and Gen X’ers, let alone Gen Y’ers. But even if you’ve never heard of him and aren’t familiar with his music, there’s a good chance you’ll be both smiling and crying by the end of the film (now available on DVD from Eagle Vision), which does a splendid job of telling his story and showcasing his singing and songwriting – both revelations for the uninitiated.

Interviews with friends, family, band mates, engineers, roadies, and musical contemporaries are intercut with great archival footage and photographs of Lane’s various bands, from his first attempt in his teens (the Outcasts, marking the beginning of his relationship with drummer Kenney Jones) to the eclectic, homespun aggregation known as Slim Chance and the traveling gypsy tent show that gives the film its name. And Ronnie tells much of his story himself, in both audio and video interviews – the latter filmed in his adopted home of Austin, Texas, in 1987, about ten years into his battle with multiple sclerosis, the disease that would take his life ten years later, at age 51.

As the Small Faces, Lane, Jones, singer/guitarist Steve Marriott, and keyboardist Ian McLagan were the epitome of mod fashion and, as evidenced in a live 1965 performance on German TV, a scrappy, rough-rocking band. They power through a great rendition of “What’cha Gonna Do About It,” with Marriott thrashing a Gretsch White Falcon while Lane beefs up the bottom end on his hollowbody Harmony bass.

Clapton describes the quartet as “hobbits,” and Ronnie tells the story of seeing a photograph of the diminutive McLagan in a magazine and saying, “He looks like one of us” – the impetus for recruiting him into the group.

The band evolved from its R&B roots to psychedelic pioneers, scoring their only American hit with “Itchycoo Park,” which rose to #16 in 1968. At the end of that year, Marriott abruptly split to form Humble Pie with Peter Frampton. Although the film more than amply shows Lane to be one of rock’s most expressive vocalists, with his higher, sweeter tone, he was a far cry from the soul-shouting Marriott, so the band scrambled to find a lead vocalist, not to mention a new guitar player. They nabbed Rod Stewart and Ron Wood, fresh off their tenure in the Jeff Beck Group, and abbreviated their name to Faces.

Of this incarnation, Grease Band (and Slim Chance) guitarist Henry McCullough says, “They knew how to party all the time.” Invariably cited for their booze-fueled, rough-and-ready live shows (at one point actually having a bar onstage), they were also first-class musicians, able to seamlessly shift from rockers like “Stay With Me” to beautiful ballads like Lane’s “Debris.” McCullough declares, “Faces at that time were the best rock and roll band in the world.” And, with equal parts pride and wonder, Lane says, “I used to be quite amazed at my own band!” 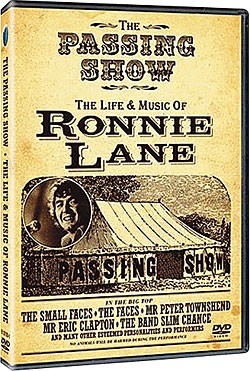 As Rod Stewart’s stardom began to overshadow the group itself, Lane, who was unconcerned with the trappings of fame, quit, and, in Jones’s words, “The spirit of Faces left.” (Interviews with Stewart and Wood are conspicuous in their absence, while Jones and McLagan offer some of the film’s best anecdotes.)

Lane led a back-to-basics life in his trailer, parked in Pete Townshend’s back garden. The “balance of wit, expertise, craftsmanship, light-heartedness, seriousness, and darkness” that Townshend cited in the collaborations of Lane and Marriott were also present in the originals Lane debuted with Slim Chance – a mostly acoustic, loosely country-rock band, featuring accordion, sax, mandolin, and twin fiddles.

Slim Chance and the subsequent Passing Show provide the most interesting portions of the film – partly because it was such a fascinating detour, partly because his music was finally front and center, and largely because these chapters were virtually unknown to Americans at the time, because neither toured the States or released any records here.

Some of Slim Chance’s recordings were made on the farm where Ronnie lived, with the band and microphones set up out in a pasture, by Lane’s mobile recording bus, which is what most of his Faces money went into. In other hands, that could easily become a contrivance, but the setting perfectly suited Slim Chance’s musical aesthetic and vice versa.

No one but Ronnie Lane, who wrote the song “April Fool” in honor of his actual birthday, would conceive of something like the Passing Show, let alone attempt to implement it. Venturing into small towns that touring acts would bypass, its fleet of ramshackle trucks and buses crawling at 10 to 15 miles an hour, his troupe of clowns, jugglers, dancers, fire-eaters, and musicians would raise a circus tent, put on a show, then meander to the next village.

By some accounts, the early signs of MS, the same disease that had claimed his mother, could be seen as far back as the early ’70s. In 1983, Lane and one of the most star-studded bills in rock history assembled to play a series of ARMS (Action for Research into Multiple Sclerosis) fund-raisers – featuring Jones, Clapton, Jeff Beck, Jimmy Page, Charlie Watts, Bill Wyman, Joe Cocker, and Paul Rodgers. Sadly, a Houston lawyer supposedly working on the foundation’s behalf absconded with approximately 90 percent of the million dollars raised, taking advantage of one of the qualities that made Lane so loveable, his naivete.

But Lane fell in love with Austin’s supportive music scene and became part of it, performing for as long as he was able, to the delight of local fans. After marrying for the third time, he moved to rural Colorado, where he spent his final years. As he often said philosophically of life, “It’s a short movie.” Thankfully, the makers of The Passing Show put a lot of heart and soul into this short movie, a much-deserved tribute to one of rock’s true individuals.


This article originally appeared in VG‘s February 2007 issue. All copyrights are by the author and Vintage Guitar magazine. Unauthorized replication or use is strictly prohibited.
Ronnie Lane – You never can tell