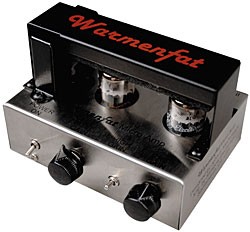 Rainbow Electronics is, as the kids say, “old-school.”

How old? Well, if you lived in the Sacramento area in the mid 1960s and your color television went on the fritz, you had very few choices when it came to repair shops; one of them was Rainbow Electronics. But, since its current owner, John McCormack, purchased the company in 1988, it has specialized in repairing and modifying audio/video equipment. It also builds our subject at hand, the Warmenfat Micro Amp.

As Rainbow sees it, the stout little all-tube-powered Warmenfat has myriad uses: it’s a practice amp for guitar, bass, or keyboard; a preamp that adds tube warmth/crunch to solidstate (or clean tube) amps; a microphone preamp; or a buffer in an effects loop.

The unit uses two Amperex 6GH8A tubes(which produce two watts of output), Ohmite metal-film resistors, and Wima polypropylene capacitors, all housed in a steel-and-aluminum chassis. Its 1⁄4″ input, preamp out, and speaker-out jacks are all chassis-mounted, as are its two RCA line/record outputs, Pre Gain control, Post Gain control, and High Gain micro switch, and its Power On micro switch.

We recently tested the Warmenfat’s versatility with the help of two speaker cabinets and a Hamer Daytona equipped with three single-coil pickups. Our cabs included a 2×12″ open-back with ceramic Tone Tubby speakers and a closed cab with a 4″ paper-cone/ceramic-magnet speaker. We also ran it through a set of Numark headphones.

Through our 2×12″, the Warmenfat yielded a decent low-volume overdrive sound with nice warmth, especially with the High Gain switch on and both Gain controls turned up. Our 1×4″ cab, with its inherent midrange tendencies, helped the Warmenfat produce a better clean sound, while the distortion tones sounded more like you’d expect from a small practice amp. 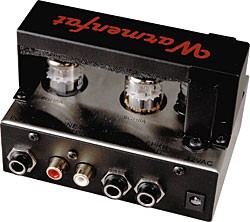 From a strictly practice standpoint, the amp sounded best through the headphones, where, with the Gain controls at 3 o’clock, it produced a warm, fat, clean sound as well as a crunchy blues overdrive as we manipulated the guitar’s controls and the amp’s High Gain switch.

We also tried the Warmenfat through the effects loop of a solidstate Crate Power Block amp. Placing it at the beginning of the signal chain (in front of a Carl Martin Red Repeat delay, E-H Holy Grail reverb, and an E-H Small Clone chorus), the Warmenfat shined, adding much-needed warmth to the amp’s tone, especially in terms of high-end and midrange response. It also added depth and character to each of the effects units and, with the High Gain switch engaged, added fat, bluesy overdrive that was musical (until we drove the Gain too hard, when it tended to get a bit fuzzy).

Using two XLR-to-1⁄4″ adaptors, we used the Warmenfat as a tube mic preamp in front of a large-diaphragm condenser mic running into a mixing console. We set the Warmenfat for its cleanest possible gain setting and listened to an acoustic guitar mic’d with an Audio-Technica AT2020 studio condenser. The A-T’s tone was noticeably warmer and more natural-sounding when used with the Warmenfat.

Our only concern with the little amp was a 60-cycle hum that developed when the Gain controls were turned past 1 o’clock, even when a guitar wasn’t plugged into it. Nonetheless, this is a versatile unit that covers the ground of a practice amp or a single-channel tube preamp. It’s a cool little unit that can inject tube warmth and overtones into just about anything – guitar, bass, keys, effects, or microphones.