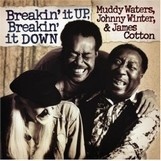 Even though Waters was undoubtedly the most important blues artist in Chess Records’ stable (indeed, the most influential bluesman of his generation), when you look back on his discography, most of his albums for the label imposed some sort of gimmick. Muddy the acoustic folkie, Muddy surrounded by brass, Muddy in London, Muddy in Woodstock. Some (like Fathers And Sons) worked better than others (the embarrassing Electric Mud), but, with the exception of a couple of fine live outings (one at Newport, one at Mr. Kelly’s in Chicago), he was seldom left alone to just be Muddy.

That, combined with multiple injuries suffered in a 1969 car wreck, had his career stalled before Johnny Winter stepped in and produced 1977’s Hard Again (on the guitarist’s Blue Sky label). Finally, somebody let Muddy be Muddy.

The 11 previously unreleased live tracks presented here come from a March ’77 tour in support of the album, a month before Waters turned 62. As in the studio, he’s surrounded by a combination of his own band, his former harp player, James Cotton, and Winter himself on guitar – with Pinetop Perkins on piano, Willie “Big Eyes” Smith on drums, Bob Margolin on guitar, and Cotton’s bassist, Charles Calmese. As much a party as a summit meeting, the set kicks off in fine style, with a rousing medley of Winter’s “Black Cat Bone” and “Dust My Broom,” the Robert Johnson song it was based on – with the three principals trading vocal turns.

Not a dull moment is to be found, as Muddy reprises his first hit, “Can’t Be Satisfied,” and shares vocals with Perkins on “Caledonia”; Winter serves up the Freddie King slow blues “Love Her With A Feeling” and J.B. Lenoir’s bopping “Mama, Talk To Your Daughter”; and Cotton fires up “Rocket 88” and mines the deepest of all shuffles on “How Long Can A Fool Go Wrong.”

Barely six years after this celebration closed – with (what else?) an all-hands-on-deck “Got My Mojo Workin'” – Muddy would be gone, at age 68. To say this release is welcome would be a huge understatement.