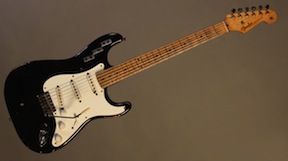 Gruhn Guitars is set to offer for sale the earliest known custom-color black Fender Stratocaster. Musician Howard Reed, Jr. (1937–’81) ordered the guitar in 1955 through McCord Music Company, in Dallas. In ’58, Reed joined Gene Vincent and His Blue Caps and used the Strat as his primary guitar onstage. He also used it on “The Big D Jamboree,” on CBS Radio in Dallas. It carries a neck date of 11-55, and tape in the control cavity signed by Gloria (one of Fender employee who assembled it). Reed applied three stickers with his initials “H A R” to the upper bass bout.

The guitar was on display at the Rock and Roll Hall of Fame and Museum from January, ’98, through May of 2013. For more, visit guitars.com.