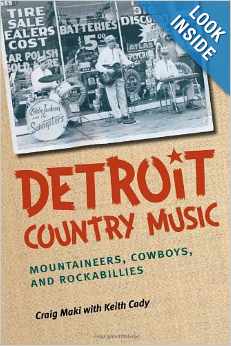 Craig Maki and Keith Cady provide a well-researched look at an overlooked part of Motor City’s rich musical history. They offer new or little-known information about the fertile Detroit scene that inﬂuenced people such as Del Shannon and Commander Cody and His Lost Planet Airmen with Bill Kirchen.

The Motor City nurtured many country and pre-rockabilly pioneers. Included are the York brothers and Chuck Carroll, guitarist for Casey Clark’s Lazy Ranch Boys. Clark’s band featured steel-guitar icon Buddy Emmons, who talks here about getting possibly the ﬁrst pedal-steel guitar in Michigan, a Paul Bigsby custom-made model with “Bud Isaacs tuning on the outside neck” and “the other two (set up like) Speedy West’s.” Emmons began as a kinetic guitar showman who often straddled the front of his non-pedal steel and played behind his back like a rockabilly T-Bone Walker.

Detroit Country showcases homegrown ﬁgures like rockabilly icon Jack Scott, born in Windsor, Ontario, but raised in suburban Detroit. And it chronicles the many transplants, mostly from the Deep South, who were important to the development of country and rockabilly music, variations of what was then called “hillbilly music,” and to guitar culture as well.