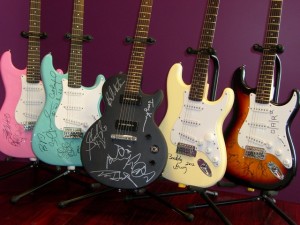 Sensaphonics, the technology leader in personal monitoring, has announced its support for the annual Auction 4 Audiology, a fundraiser for the American Academy of Audiology Foundation (AAAF). The auction features several autographed items of music memorabilia, the proceeds from which will fund research for hearing health in musicians.

Auction items include electric guitars signed by Aerosmith, Lady Antebellum, the Dave Matthews Band, Buddy Guy, and O.A.R., all donated to the cause by Sensaphonics president and founder Dr. Michael Santucci. Additional autographed items include a framed gold record by Coldplay and concert poster from Umphrey’s McGee.

The Auction 4 Audiology takes place in conjunction with the annual AudiologyNOW! Convention, March 28-31 at the Boston Convention and Exhibition Center. The American Academy of Audiology Foundation’s mission is to promote philanthropy in support of research, education and public awareness in audiology and hearing science. All donations are tax deductible.