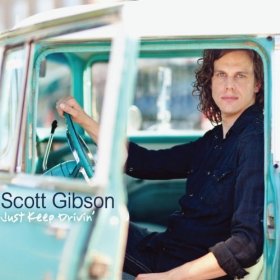 It’s hard to toss a quarter in Nashville without hitting a songwriter holding a tip jar, but few have Scott Gibson’s songwriting chops. On Just Keep Drivin’, Gibson delivers 12 reasons he should be on your radar.

Born inWaco, many of Gibson’s songs are stories aboutTexas; the title tune tells the tale of musicians on the road, using a propulsive beat pushed by electric guitar as it builds to an anthemic chorus. Gibson’s simple phrasing and avoidance of vocal pyrotechnics allows the songs to stand on their lyrical merit.

“Holy Hallelujah” is a quirky commemoration of the fine art of going out with the girls. “Sing Praise” is a Gospel call-and-response tune that harkens to tent meetings in theTexascountryside.

If traditional and country roots music is to survive, young performers must embrace them as musical forms. Scott Gibson is up to the task.

This article originally appeared in VG‘s April ’11 issue. All copyrights are by the author and Vintage Guitar magazine. Unauthorized replication or use is strictly prohibited.