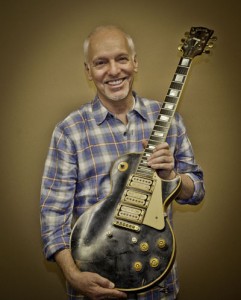 Peter Frampton’s long-lost guitar was recently discovered after its disappearance in a plane crash 32 years ago.  In 1980, a cargo plane carrying Frampton’s equipment for an upcoming show in Panama crashed, supposedly destroying all of the instruments on board including Frampton’s cherished 1954 Gibson Les Paul. Thanks to the unyielding work of two dedicated fans, one in Holland and one on the Dutch Caribbean island of Curaçao, as well as the CEO of the Curaçao Tourist Board, Frampton was reunited with the guitar in an emotional meeting last month in Nashville.

The Curaçao Tourist Board helped acquire the guitar from an individual after hearing news that they may indeed have a lead on the long lost and beloved guitar. Together at the Gibson Custom Shop, with experts from Gibson Guitar and Peter Frampton, the team confirmed it was the original guitar long missing from Frampton’s collection.

The guitar was given to him in 1970 by a man named Mark Mariana when Humble Pie played at the Fillmore West. Frampton borrowed it for the show and afterward tried to buy it from Mariana, “But to my surprise, he said he couldn’t sell it to me – he wanted to give it to me!” he notes.

Frampton played the Custom exclusively on Humble Pie’s Rock On and Rocking the Fillmore albums. The guitar also appeared on a number of sessions for other artists including George Harrison, Harry Nilsson, and John Entwistle. Most notably, Frampton played the guitar on the electrifying Frampton Comes Alive!, one of the top-selling live records of all time.

Frampton is ecstatic to have the guitar. “I am still in a state of shock, first off, that the guitar even exists, let alone that it has been returned to me. I know I have my guitar back, but I will never forget the lives that were lost in this crash. I am so thankful for the efforts of those who made this possible…And, now that it is back, it’s never going out of my sight again! It was always my #1 guitar and it will be reinstated there as soon as possible — some minor repairs are needed. And, I just can’t wait to get Mark Mariana on the phone.”