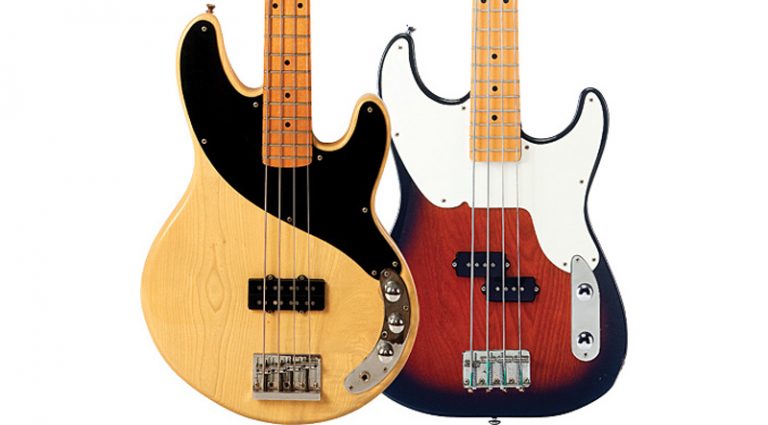 While the Robin guitar brand’s reverse “imported then domestic” chronology has been documented in this space, the basses shown here are the first import models marketed by the company (and one of them is from the very first shipment).

Robin guitars were marketed beginning in 1982, and basses (all manufactured by ESP in Japan) followed the next year. The company’s ’83 catalog announced two 34″ scale basses – the single-pickup Freedom and the two-pickup Freedom II – as well as the 32″-scale Ranger as the company’s first entries in the bass market. The Ranger was matched with a guitar, but the Freedoms had no six-string counterpart. All three had maple necks, and fretboards were maple (part of the actual neck) or a rosewood cap. In spite of the differences in scale length, both had 21 frets.

The headstock vaguely resembled an upside-down Fender headstock, and had a two-plus-two tuner configuration. It also had an unusual/centered “tree” to guide the A and D strings.

The contoured body was usually made of ash or alder, and the oversized pickguard gave a retro nod to the Fender Precision Bass of the early/mid ’50s.

The Freedom was given humbucking pickups and initially had active circuitry, while passive versions were later available. They also had a “high-mass” bridge/tailpiece combination. Controls were a master Volume, Bass, and Treble, and the Freedom II had a three-way toggle for pickup selection.

Curiously, the Ranger Bass’ debut catalog photo shows a single straight-bar pickup, but according to David Wintz, president of Robin’s parent company, Alamo Music Products, that instrument photographed was a one-off prototype; production Rangers had a split P-Bass-style pickup as well as a standard bridge/tailpiece, and simple Volume and Tone controls.

The Freedom shown here in Old Blonde is from the first shipment of basses ESP sent to Houston; its neck width at the nut is 13/4″ (a la the P-Bass), and its neck has a walnut “skunk stripe” running down its back.

“The very first Freedoms had wide necks,” Wintz recounted. “Too wide, in fact – wider than we requested. As soon as we got them, we changed (the specifications) for future production.”

Later-model Freedoms were 11/2″ wide at the nut, their necks didn’t have a skunk stripe, and their headstocks had a bar-type string retainer that was installed in Texas. “Once we realized that three strings could use some help, we installed the bars here in Houston, using the hole from the round two-string tree, and drilling another hole for the bar,” said Wintz.

The Freedom and Freedom II later were given black hardware. The Ranger, on the other hand, kept its retro-vibe aesthetic, though alternate colors were offered, such as Light Blue and Pink Pearl.

The Japanese-made basses last appeared in the company’s 1988 catalog, by which time Robin was in the initial stages of domestic production. And while the Freedom Bass was discontinued in ’89, the Ranger was held over in name only, as the domestic version was a full-scale instrument with an upside-down headstock, tuners all in a row (a longtime configuration of Ranger guitars), and two pickups in a “P/J” configuration (VG, February ’07).

Robin exited the bass market in 1997, but not before crafting 20 domestic Freedom II models, using imported necks discovered in storage. The first example was profiled in VG‘s June ’05 issue.