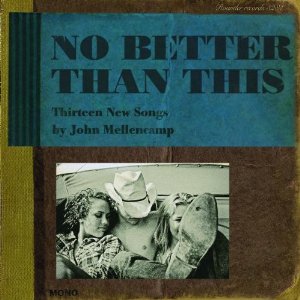 John Mellencamp’s latest effort fits its title and is a perfect companion to the recent box set that showcases his songwriting. In fact, the songs here are some of the finest he’s ever written.

Couple that with an extraordinary way of recording and heartfelt performances from all concerned – especially Mellencamp – and he may have made his finest record.

With producer T-Bone Burnett, Mellencamp and company recorded in three venues – Sun Studios in Memphis, the First African Baptist Church in Savannah, Georgia, and the Sheraton Hunter Hotel in San Antonio (where Robert Johnson recorded). They used an Ampex recorder from the ’50s, huddled around one microphone. The result sounds timeless and haunted by the ghosts of American music that came before it. Yes, it sounds lo-fi, but it fits songs like “Save Some Time to Dream” and “Right Behind Me,” with their acoustic guitar, and violin from Miriam Sturm. Some of the sounds call to mind Tom Waits, which makes sense given that Waits sideman/guitarist Marc Ribot is one of the players here, along with Mellencamp-band stalwart Andy York. Both supply perfect twanging guitars, rockabilly solos that ring true, and subtle lines that highlight often-brilliant lyrics Mellencamp has fashioned. Despite the effort to make this recording as simple as possible, great pains were obviously taken to make the guitars sound just right.

No Better Than This is an amazing project that could have come across incredibly self-conscious. Instead it’s a testament to the power of simplicity and brilliant songwriting that, to this point, may be the best record made by one of rock’s best songwriters.