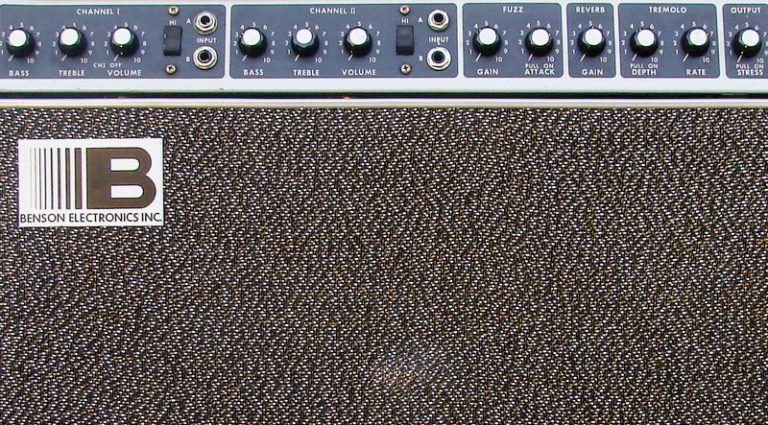 Even with all the excellent guitar amps available by the late ’60s, nothing was quite good enough for jazz and studio great Howard Roberts – so he co-designed his own. This 1971 Benson combo spent many years with a former Roberts student, and reveals what might have been one of the world’s top combos, had the brand taken off.

The adage persists in the guitar realm that there’s no money in jazz, but any real jazz artist will tell you that there never was. Even in the golden age of jazz, musicians earned their bread as session artists and sidemen playing anything that would pay, then expressed their deeper artistry via late-night club dates for nominal cover charges, tips, and maybe a small cut of the bar takings. It was chump change at best, but they were never in it for the money. Such was the life of Howard Roberts, and he maximized the disparity between the two worlds to squeeze the most out of both.

And no doubt that life had some challenges, though they might have come from surprising corners. In June of 1991, during the last known interview of Roberts (who died of cancer in June ’92), Paula Drake asked what he felt was the hardest part of studio work.

“The hardest music to play is ‘Tom and Jerry’ – cartoons. The music makes absolutely no sense, as music. You can’t get into hearing it. There’s nothing to hear; ‘bleep!, bloop!, scratch!’ and it comes fast; everything’s first-take. That’ll change the way you look at life.”

If you don’t recognize Drake’s name among the roll call of notable jazz journalists and music writers, that’s because it wasn’t.

“I was taking a writing class, and I needed to interview someone, so I contacted Howard in Seattle and went there and interviewed him, and took pictures,” the 87-year-old guitarist told VG.

Not that just any adult-ed writing student might have access to a star like Howard Roberts, but it turns out Drake had a prior connection – in the ’50s, she was a student of his in North Hollywood, and the two dated for a time. Which is what also led to her appreciation of this amp, one of the tools with which Roberts plied his trade. Also in that interview (published by Howard Roberts fan/University of Toronto Statistics professor Michael Evans at utstat.utoronto.ca) she asks, “Most know you designed the Howard Roberts guitar put out by Gibson, but what type amp are you using?” To which the star replies, “One that’s no longer made, a Benson. I founded the company, and Ronnie Benson and I developed those amps. We got so discouraged with the business end of it, though, we said, ‘What the heck.’ But they’re great amps!”

In the November ’19 issue, we examined an earlier Benson 200 combo owned by musician and amp collector Tommie James, who acquired this 300H from Drake after she retired it from nearly 50 years of professional use.

Known to Drake even before she encountered this example in ’71, Benson amps were highly valued in the West Coast jazz community, but, as Roberts indicated, the brand never rose above the frustrations of running a business. Founded in 1966-’67 out of the desires of Roberts and Benson (then a student of the Wrecking Crew guitarist) to create an amp that could reach beyond the one-trick-pony capabilities of most of what was available at the time. And though the results succeeded in spades, a lack of promotional and business acumen – and the eventual implosion of the facility manufacturing the amps – led to the brand’s disappearance in 1974.

“I bought the amp from a bartender at Shraft’s restaurant, in Beverly Hills,” Drake recalls. “I was playing a gig there on an old Gibson amp when the bartender offered it to me for $100. I was just surviving in those days, so my brother loaned me the money. I played my guitar – always Epiphones – mic, and drum machine through the amp and its sound was warm, jazzy. Several guitarists tried to get me to sell it; one said, ‘Never get rid of that amp!’ I played it in bands, trios, combos, and singles all those years, until I sold it to Tommie James a few years ago.”

The 300H builds upon the earlier 200’s effort to present an outwardly Fender-styled amp of the late-blackface/early-silverface eras, but with a little extra versatility to suit Roberts’ desire to cover many styles with one combo. Each of two channels has independent Bass and Treble controls and bright (labeled “Hi”) switches, and makes use of a full 7025 preamp tube (a rugged 12AX7 equivalent). But despite the nominal similarities to the market leader, the circuits surrounding these stages were very different from Fender topology of the era, apparently intended to emphasize a warm, clean tone with plenty of character.

To make up for the amp’s intended lack of natural overdrive, Benson and Roberts included a built-in fuzz circuit, while also providing preamp outputs for both channels, allowing you not only to DI the thing into a live mixer or recording desk, but to chain Ch I into Ch II for a cascading gain. Along with the fuzz, reverb and tremolo were also solid-state, driven by transistors and operated on Ch II only. Adding even greater sonic versatility, it has a plug-in EQ module intended to re-voice the Channel II preamp. Each amp shipped with the #1 module installed (believed to be the case here, though its label has fallen off) but six were available for different styles of music.

Surprisingly, the phase inverter, based on another 7025 preamp tube, is the split-load type used in most Fender tweed amps of the mid/late ’50s and those of many other early makers, rather than the long-tailed-pair design that replaced it in the early ’60s. Fifty watts of power came from a pair of 6CA7 output tubes (more commonly known by their British alphanumeric, EL34), which are capable of handling the 300’s higher voltage levels better than 6L6s. The stage is capped by a master-volume control labeled Output, which is activated in Stress mode with the knob pulled out. A three-button footswitch engages Fuzz, Reverb, and Tremolo, and the entire shebang blasts through a 15″ Altec 418B speaker, an expensive and sophisticated driver for the day… or any day, for that matter.

James had its electronics serviced, and smartened the worn exterior by having the Tolex replaced with new old stock of the same stuff.

“It now looks as good as it sounds, which is awesome!” he tells us. “Fifty watts of warm, clean tones at any volume, with beautiful reverb and tremolo. My ears don’t care much for the Fuzz feature. It was revolutionary in an amp of that vintage, but it’s too harsh for my taste. The sound module enhances bass and treble in Channel II when the volume is turned up. It’s great for jazz.”

Add it up and the features might be enough to get you through 400 film scores and 2,000 album sessions – the work logged by Roberts at the height of his career.