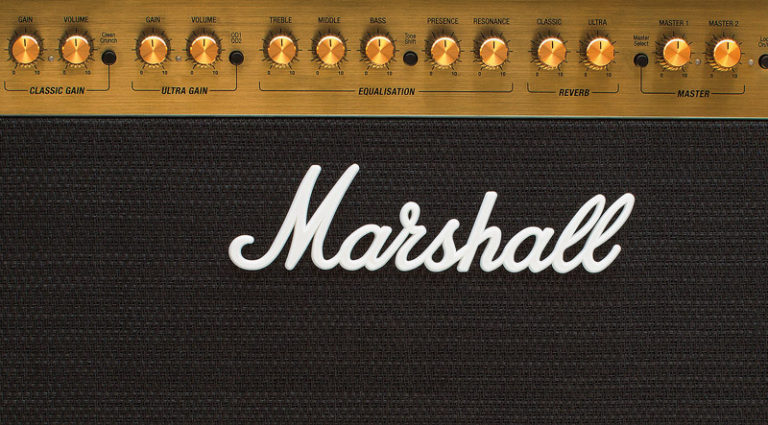 In the minds of guitarists, the Marshall name verges on mythic – from Bluesbreakers to plexis, they hold a special place. However, while iconic in terms of tone, they’re also famous for being loud, and sometimes temperamental.

Today, guitar-amp technology is about arrays of streamlined circuits that fit into small, gig-friendly enclosures. And while Marshall is well aware of its glorious history, they also understand the needs of modern guitarists, and their DSL line is designed to meet them.

The DSL40CR is a 40-watt 1×12 combo with all-tube circuitry. Its multi-channel design includes power attenuation, digital reverb, and footswitchable features. At its heart are two EL34 tubes, four ECC83 (12AX7) tubes in the preamp, and a 12″ Celestion V-Type speaker. Its Classic Gain and Ultra Gain channels are both dialed with Gain and Volume controls and an EQ section that includes Treble, Middle, Bass, Presence, Resonance, and a Tone Shift button (scooped mids!). For Reverb, there are controls labeled Classic and Ultra. Master Volume knobs are assigned for each channel. It has a switchable effects loop, dual speaker outputs, and an included footswitch. Classic Gain and the Ultra Gain channels each have a boost button, and either can be dialed-in for anything from funk to face-melting saturation.

Nothing sounds better than a single-channel amp that does one job really well, and the DSL40CR gets close. What it lacks in depth and richness from the clean channel it makes up for in approximating Jimi’s glassy “Little Wing” live tone or Zakk Wylde’s brutal high-gain soloing. The Ultra channel is intense; single-coils and humbuckers both soar with lustrous JCM800 chunkiness and sustain, and having two Master Volumes is a great idea so users can manage separate volume levels within a song. The only thing that keeps the DSL40CR from fully offering the honest, earthy tone of a vintage Marshall is its too-subtle reverb.

Overall, however, the amp shines. From sinewy lead tones to ballsy cleans with reverb, it captures that unmistakable British flavor in a modern package. It can roar like a beast onstage, while Power Switch cuts output in half for home use. The DSL40CR has a wealth of Marshall tones perfect for rehearsal or stage use – and the price is right.