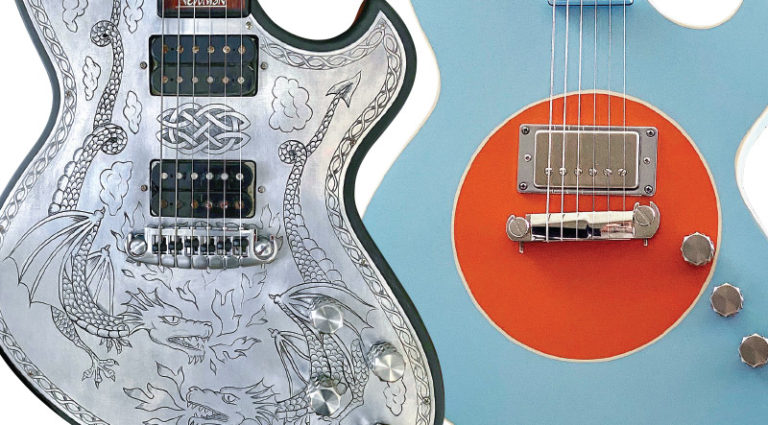 Newman Guitars was established in Austin, TX in 1977 by Ted Newman Jones. Ted was a pioneer of design and began working for Keith Richards exclusively in late 1971. Ted and Keith designed the first five string open “G” guitar during the 1972 Rolling Stones U.S. Tour for Exile on Mainstreet and he worked for Keith Richards exclusively from 1972 to 1978.

Danny McCulloch, a close friend of Ted recalls the birth of NEWMAN Guitars like this: “In 1977, Keith Richards gave us $20,000 to set up shop in Austin, TX. Ted and I set up in a big warehouse on 4th Street in downtown Austin. It was a prime location just two blocks East of Congress Avenue and the Greyhound Bus Station. It was also 2 blocks South of Austin’s famous 6th Street, which was in its formative stages. It was the place to be. Soon after, Ted and I hired Bob Harris and Joel Judlin to help. We flew to Memphis the summer of 1978 to catch the Stones’ Some Girls tour and one evening, we went downtown with the band and had BBQ spaghetti. That was when I recall Bill Wyman pointed out to Ted that the word Newman could be an ambigram if you messed with the e and the a.”

Fast forward to March of 2015, Ted Newman Jones and Jeff Smith began working together to rebuild the company. Soon thereafter, Ted built the first experimental prototype. It was painted a special turquoise color to mark the occasion. This would, however, be the last guitar Ted would build. Later in the Summer of 2015, he would be diagnosed with lung cancer. Jeff found himself in transition mode and needed to find a way to preserve Teds intellectual property. In December of 2015, Ted and Jeff began working with Jacob Harper to digitally store patterns, asymmetrical V neck carves, neck radius, headstock pitch, construction, etc. Jeff says: “My goal was to digitally capture everything Ted knew relevant to the NEWMAN design and get things built and submitted for his approval within his lifetime.”

Preserving the past was necessary before you can move to the future and NEWMAN has made significant design improvements over the past seven years without changing the essence of the original vision. “We have been building guitars with Billy F. Gibbons which has revolutionized our understandings of what it takes to make the lightest weight, roadworthy, resonant tone machine possible. Billy has always been kind with his thoughts on how we can get to the next level. We listen carefully and always take his advice.” says Smith.

Newman Guitars has also been fortunate to work with Danny O’Brien, Master Engraver in England. His engravings on the guitars by Tony Zemaitis are some of the most legendary in rock history. Jeff Smith: “We were introduced to Danny by our good friend and fellow collector, Ian Dickey. We then contacted David Humphreys in England to get the metal cut so Danny could engrave them. Eliot Michael of Rumble Seat Music worked back and forth with Danny on sketches and eventually approved a spectacular dueling Dragons engraved design which we turned into a beautiful guitar. We were happy to be working with many of the greats in the industry.”

It is true that, having a custom guitar built is different than having a custom-built guitar. NEWMAN Guitars has developed a unity with the independent builder community through mutual respect and design share. Jeff Smith says, “With the NEWMAN body shape unchanged since 1978, it can be daunting task to stare at the same shape and get new perspectives. When Ted passed away in July of 2016, I set out to work with the luthiers I thought Ted admired, but never had a chance to collaborate with. My plan was to ask them to impart their vision of a NEWMAN. These luthier relationships have been critical to gaining perspective on the endless possibilities for the NEWMAN shape. It is true that everyone has an opinion, but… few have the knowledge and ability to conceptualize and then realize. We have been blessed to work with great luthiers such as Jacob Harper, Robert Mondell, Saul Koll, Bill Harden, Greg Platzer and Matt Flaherty. The collaborative input from boutique guitar builder community is always refreshing.”

NEWMAN Guitars is a great balance of old and new. The company continues to stretch its boundaries without leaving the legacy which got them started.