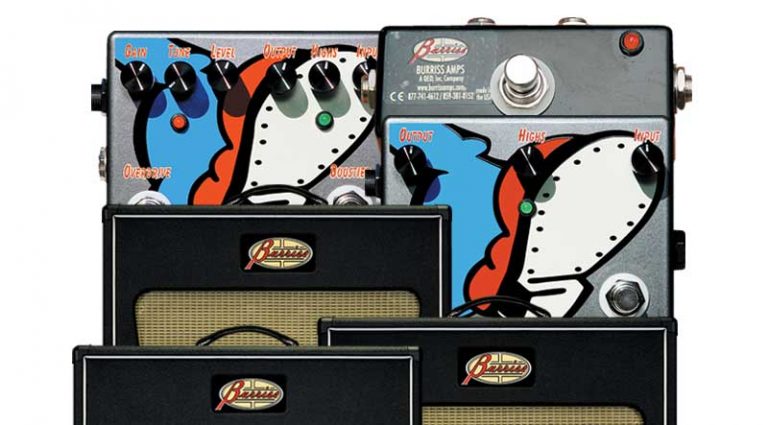 Guitarist and amplifier repairman Bob Burriss started building his line of amps in 1994, after building many custom/one-off amps. In ’06, he introduced the Switchmaster, DB Special, and Shadow amps. All three have a hinged lower back panel that opens to allow the amp to be tilted back, in vintage Fender fashion. Besides enabling one to tilt the amp back, it does create subtle changes in the amp’s low-end response.

On Channel 1, in the Jazz position, the Rock/Jazz switch cuts most of the gain and a good bit of low-end response. Setting the Bright switch in the middle and leaving the character switch in the Rock position, the amp can be dialed in to make some fine blackface Fender clean tones. Channel 2 produces a nice, chunky overdrive, especially with the rear humbucker of our PRS Custom 22, and cranking up the Gain made the tone thick and rich while retaining its articulate character.

DB-Special
The 38-watt DB-Special is a single-channel amp with controls for Gain, Treble, Mid, Bass, Master volume, and Presence. It utilizes the same three-12AX7/two-6L6 configuration and Eminence Texas Heat speakers as the Switchmaster.

Plugging in, you’re greeted with very nice Fender-like clean tones. With our Crook Custom guitar, it was simple to zone in on a setting that allowed clean, full tones in all three pickup positions with the Treble and Mids set at 10 o’clock and Bass all the way up. The tonal range of the controls is well-conceived, and the Presence knob could just as well have been marked “Clarity.” It is extremely useful when changing guitars.

As you turn up the Gain, the amp’s tone becomes markedly more aggressive – and touch-sensitive. Cranked to distortion and with the Gain knob dimed, the tone did get a bit buzzy with the PRS, but was fine with a lower-output Fender Stratocaster and the Crook Custom. And the amp’s Master volume is one of the finest you’ll hear – very smooth – and unlike most Masters, it does not sound like you’re cutting off the gas to your engine. You get fat overdrive at lower levels.

Shadow
The 28-watt Shadow is a single-channel amp with controls for Volume, Treble, Mid, Bass, and Reverb. It has a three-position Bright switch, but instead of the Switchmaster’s Jazz/Rock character switch, this one is marked High/Low. The Shadow has the highest tube count of the Burriss line, with six 12AX7s, two 6L6s, and a 5AR4 rectifier. The tester was equipped with two Eminence Copperhead 10″ speakers. It’s also available with built-in vibrato.

Engaging the Character switch in the Low position and Bright switch in the up position produced a fat clean tone, while turning up the Volume control made the Shadow louder and louder, with no hint of breakup until the control was dimed; this is a very loud, very clean 28 watts!

The amp’s reverb is pure mid-’60s Fullerton with a bit more subtlety that creates a little air in one’s sound without causing anyone to break into “Pipeline.”

Pedal Power
Burriss also recently introduced three pedal effects, the Boostier, the Boostiest, and the Chaloopa. The former two are (as the names imply) boost pedals, while the latter is a bypass-loop. All three are solidly built, dressed up with creative graphics, and made with true-bypass switching.

The Boostier is a single-channel boost with controls for Boost, Level, and Tone. It’s a fine-sounding boost capable of serving a variety of tasks, be it buffering either end of a pedalboard or solving gain differences between guitars. It performs all of these functions well, but provides the most fun when its truckload of gain is pummeling an overdrive pedal or the front end of an amp.

The Boostiest contains the same booster, but adds a vintage TS-style channel. It functions the same on its own, but the TS channel, either on its own or in conjunction with the boost channel produces fat, round rock-infected tones.

Powered by a 9-volt adaptor, it converts power for the booster side to near 18 volts, and lowers it to below 9 volts for the overdrive portion of the pedal. This makes the boost side tight and clean, while the TS-inspired side is more “worn in” and pleasantly saggy. With the Boostiest, you can cover a wide range of overdrive tones with one box.

The Chaloopa is a single-loop pedal with standard input and output jacks and two more for the loop. The unit functions well, never pops when turned off and on, and does not color the guitar’s tone. Compared side-by-side with a variety of vintage MXR and Boss pedals, it functions like a champ. It can also be used with a tuner to allow silent tuning.

Buzz Campbell on the Boostiest II