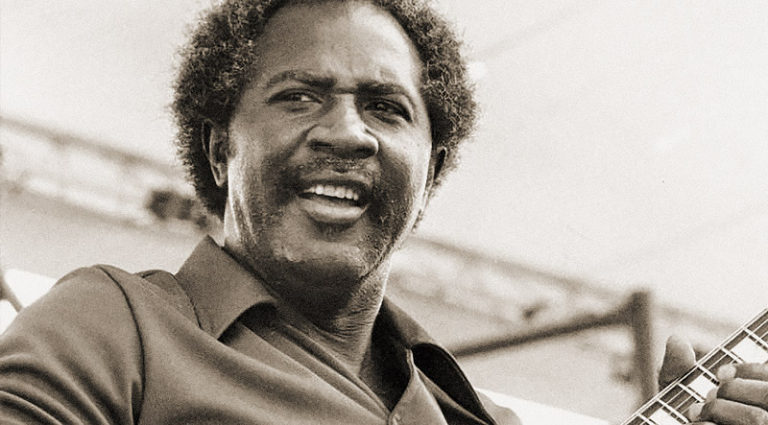 In the encyclopedia of American music, there oughta be a picture of Fenton Robinson next to “unsung blues hero.” Drop his name, though, and most fans are unfamiliar – until you say “Texas Flood.” Self-respecting listeners might respond by lauding the title track of Stevie Ray Vaughan’s 1983 debut album, which inescapably draws a timeline back to Larry Davis’ original from ’58 – but also emerges with a glimpse of the rising Texas blues form, and Robinson’s role in it.

However, Robinson’s journey wasn’t confined to the Lone Star State. His life mirrors the evolution of the blues itself and his career wove through the most-important music centers of the developing art form.

Fenton Lee Robinson was born September 23, 1935, in Minter City, near Greenwood, Mississippi, at the Eastern edge of the Mississippi Delta – spawning ground for blues pioneers Robert Johnson, Charlie Patton, Son House, Willie Brown, Big Joe Williams, Muddy Waters, Howlin’ Wolf, Little Walter, as well as B.B. and Albert King. Raised on a plantation, he was first exposed to the blues on local jukeboxes. Enamored of both the rural sounds of Lightnin’ Hopkins and the more-urbane stylings of T-Bone Walker, he fashioned and practiced on a one-string guitar as a child.

Imagining career possibilities, as a teenager Robinson began the itinerate lifestyle of a bluesman. At 17, he moved to Memphis, where he found inspiration in the city’s rich blues tradition. He bought a real guitar, took lessons, and performed at local amateur shows. In ’54, he relocated to Little Rock, Arkansas, and became a fixture of the local scene. In ’56, he contributed guitar parts to Roscoe Gordon’s “Keep on Doggin’” and recorded his first song of note, “Tennessee Woman,” in Memphis for the Bihari Brothers’ Meteor label; the song became a regional hit single in ’57. A year later, he signed with Don Robey’s Texas-based Duke-Peacock Records, the nation’s largest black-owned record company (prior to Motown), which boasted a roster including Little Richard, Otis Rush, Gatemouth Brown, Memphis Slim, Bobby “Blue” Bland, Rosco Gordon, and Big Mama Thornton (whose “Hound Dog” was an early Duke hit famously covered by Elvis Presley).

Fenton’s recruitment was part of a package deal that included bassist/guitarist/vocalist Larry Davis; Bland spotted the two playing together in Little Rock’s Flamingo Club in ’58. Davis had written the now-immortal “Texas Flood” in ’55 and recorded it with Robinson for Duke in ’58. Fenton also recorded “Mississippi Steamboat” that year as a solo artist. In ’59, he capped the decade with his Duke recording of “As the Years Go Passing By,” written for him by Peppermint Harris (though attributed to “Deadric Malone,” a pseudonym for Robey). The song became an indispensable part of the blues canon, closely associated with Albert King after he covered it on Born Under a Bad Sign (Gary Moore followed with his take from Still Got the Blues in 1990). To underscore its significance, Fenton recorded a second version on I Hear Some Blues Downstairs. 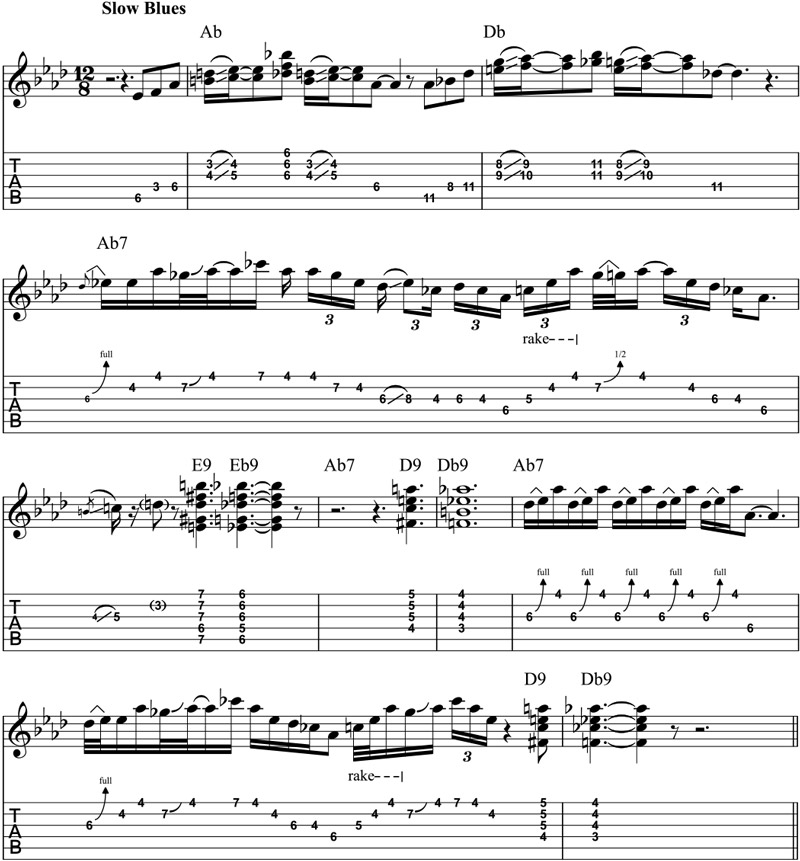 Fenton Robinson excelled at shuffles and slow blues. His intro to “Texas Flood” is a slow blues, as studied by SRV and many others. As an identifier of his slow-blues approach, it’s definitive. He begins with the famed chordal double-stop figure over I and IV changes in measures 1-3 that splits the difference between Chuck Berry, boogie-woogie piano, and soul-jazz riffs a la Wes Montgomery, Kenny Burrell, and George Benson. What follows in measures 4-6 epitomizes his florid single-note style as well as chords slid a half-step (E9-Eb9 and D9-Db9) – the T-Bone influence. Note the mix of minor-pentatonic blues scale and the major triad arpeggio in the busy note passage of measure 4. This combination remained a signature of his lead style throughout his career. The fill in 7-8 reveals a similar tactic around the verse vocals including more slid chords.

Robinson moved to Chicago in ’62, initially recording for smaller blues labels like USA, Giant, and Palos under his own name, and with artists such as steel-guitar bluesman Hop Wilson and bassist/bandleader Willie Kent. He was a notable composer, crafting a dozen blues classics and writing songs for Lowell Fulson and Larry Davis. He also performed regularly with Sonny Boy Williamson, Junior Wells, Charlie Musselwhite, and others, eventually scoring a steady gig at the legendary Peppers Lounge. Fenton first waxed his original, “Somebody Loan Me a Dime,” as a single for Palos in ’67. It became his signature song, prominently showcasing his distinctive soulful vocals and jazz-inflected guitar style (despite an unbalanced reverb-laden mix). The song was covered by Boz Skaggs, who enjoyed a hit with it in ’69 but failed to credit the composition to Robinson resulting in legal battles. In 1970, Fenton recorded several unsuccessful sides for the Nashville-based 77 label. These tracks were intended to push him into the burgeoning blues-rock movement, where he was exploited primarily as vocalist accompanied by session guitarists.

In ’74, Robinson secured a new contract with Alligator Records and recut “Somebody Loan Me a Dime” (as well as “Texas Flood”). The tune was the debut album’s title track and attained blues-standard status while raising Robinson’s visibility in the blues world; it’s heard on the police squad-car music in The Blues Brothers movie while John Belushi’s character is was being transported to (then later, paroled from) prison. The critically acclaimed debut was followed by I Hear Some Blues Downstairs (’77), which scored a Grammy nomination, and Nightflight (’84). After his Alligator period, he recorded for various European labels, releasing Special Road and Out of Chicago, performed regularly in the Windy City area, toured the blues circuit, and appeared at national festivals. He moved to Springfield, Illinois, and became involved with the local school system, teaching blues history and guitar techniques. Afterward, he resided in Rockford, married, and occasionally played concerts including an appearance at the ’95 Chicago Blues Festival, attended by over 100,000 fans. Robinson suffered health problems in mid ’90s and on November 25, 1997, succumbed to complications from brain cancer. He was 62. 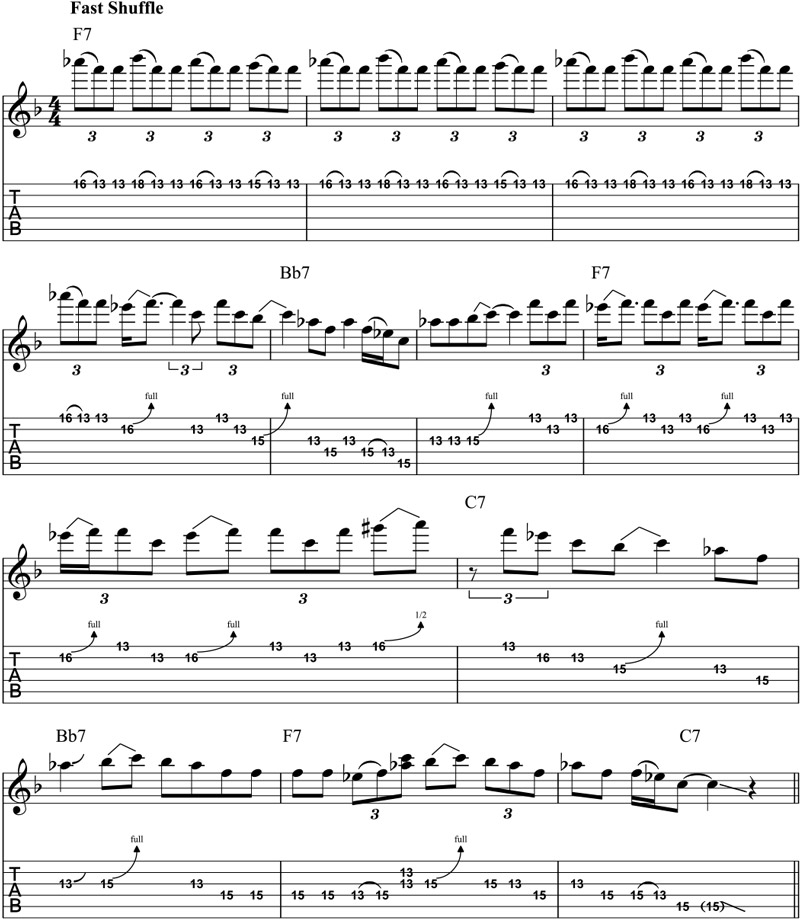 “Nightflight” demonstrates Robinson’s skill at handling fast shuffles. The instrumental piece, a 12-bar blues in F, is distinguished by several noteworthy choruses of improvisation. This section (at 2:18) begins with a motorific triplet riff toggling between Ab, Bb and G in a pedal-point pattern in measures 1-3; the aggressive opening phrase gives way to more fluid and extemporaneous lines. Note the mix of stepwise minor-pentatonic lines and string bends, particularly the half-step bend from G#-A in 8, which emphasizes the minor-major polarity of the blues.

Robinson described his playing as “Texas-style,” alluding to his inspiration from and reinterpretation of T-Bone Walker’s swing-jazz/blues amalgam, pentatonic/blues scale melodies, subtle string bends, winding triplet lines and sliding chord moves. Japanese fans dubbed him “the mellow blues genius” for those very qualities. Like his role model, he favored a cleaner tone with a slight edge and cultivated a mellower sound, elaborated with adventurous note choices, idiosyncratic phrasing, and freer jazz-informed chord textures, while many cohorts gravitated to heavier overdrive and emphasis on single notes and wider string bends. In later years, Fenton’s reluctance to incorporate a raucous vibe may have lost sectors of the audience, but personified his integrity and individuality.

A telling aspect of his lead-guitar approach is the use of florid, aggressive passages decorated with chromaticism and heavily-attacked licks to fill space often dominated by sustained sounds in his contemporaries. This tendency was evident in early solos like in “Texas Flood” and “The Getaway,” but grew more pronounced in later years, particularly on Special Road and Out of Chicago, which gathered live and studio tracks from ’89 to ’92. Consider the multi-note passages and expanded jazz-blues lines in “Just a Little Bit” and “Help Me,” as well as the signature chromatic runs in “You Don’t Know What Love Is,” “R.M. Blues,” and “Too Many Drivers.” Hardly formulaic, these are contrasted by grooving, rhythmically-guided lead work in solos like “Killing Floor” and “Ghetto Train.” In many instances, he applied dissonant diminished and extended arpeggio sounds, quick pentatonic flurries that mimicked sax double-timing, and modal runs (“Baby Please Don’t Go”) but never disturbed the underlying blues mood. Also noteworthy was Fenton’s expansion of traditional 12-bar blues to include post-Motown R&B (“Slow Walkin’”), funk (“Slick and Greasy”) and gospel influences. The experimental altered blues/fusion heard on “Lost My True Love” is bolder; flaunting numerous progressive ingredients – an oblong riff, mixed-meter bar lengths, and prominent eleventh chords. Another case is exemplified by “Nightflight,” his answer to the guitar-instrumental form. Fenton’s flight contains several choruses of inspired improvisation marked by intricate single-note blues lines, sophisticated chord passages, aggressive ostinato figures, and genre-busting jazz inflections. 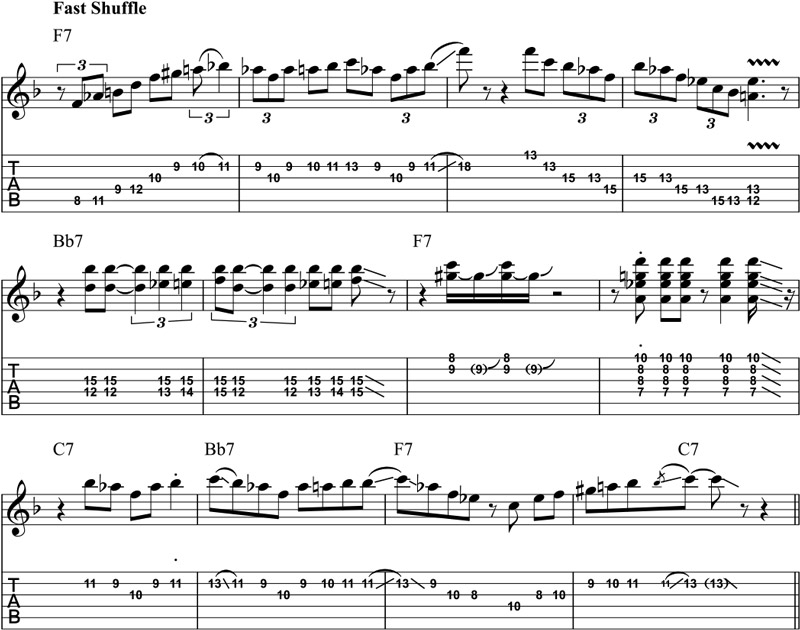 The more-conventional content of the previous example is beautifully contrasted by this telling segment from “Nightflight” (at 2:50), filled with numerous Robinson idiosyncrasies. Check out his rising diminished arpeggio coming out the gate and merging with minor-pentatonic lines in measure 2. Also notable is the purposeful chromaticism throughout in Ab-A-Bb cell in 2, 10 and 12 (a common Robinson element) in this chorus. The double-stops in this example represent three distinct colors in Fenton’s paint box – pianistic voice-leading dyads in 5-6, a swampy bent double-stop in 7, and jazz-based F13 chords in 11. The latter are delivered with the syncopated hits of a big-band figure.

Somebody Loan Me a Dime, I Hear Some Blues Downstairs, Blues in Progress, and Out of Chicago are definitive. Blues connoisseurs will also want to explore his earlier playing on The Best of Duke-Peacock Blues.

There are precious few live videos of Fenton. Recommended performances include “Somebody Loan Me a Dime,” “Blue Monday,” “Checking On My Woman” and “Stormy Monday” from a 1984 concert in Holland, and “Too Many Drivers” from an appearance at Buddy Guy’s Legends club.

Robinson began his career on a Stratocaster given to him by Ike Turner, but by ’59 he’d found his signature voice on a late-’50s Gibson ES-125TDC, a thinline hollowbody with two P-90 pickups, trapeze tailpiece, and Florentine cutaway. He was seen with a natural-finish example on the cover of his single, “Somebody Loan Me a Dime,” and the compilation Charly Blues Masterworks Vol. 41. In later years, as pictured on Nightflight and Blues in Progress, his 125 was upgraded with an ebony fretboard sporting split-block inlays, binding, and metal-keyed Grover Rotomatic tuners; it originally had an unbound rosewood dot-inlay fretboard and its tuning keys had small plastic buttons. At one point it bore a Gretsch “G” metal tailpiece, shown in a Newport cigarette ad. In the ’80s and ’90s, he moved to the Gibson Byrdland seen on Special Road, Out of Chicago, and used on his ’84 tour of Holland.

Robinson plugged into various Fender amps and by ’76 professed a preference for the Twin Reverb. He used an Ampeg combo during his ’84 European tour.

Wolf Marshall is the founder and original editor-in-chief of GuitarOne magazine. A respected author and columnist, he has been influential in contemporary music education since the early 1980s. His books include 101 Must-Know Rock Licks, B.B. King: the Definitive Collection, and Best of Jazz Guitar, and a list credits can be found at wolfmarshall.com.