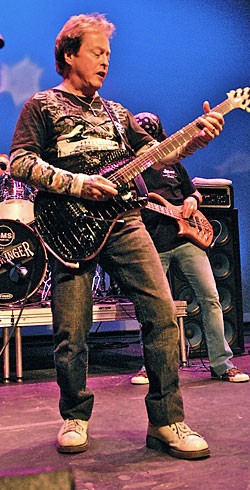 Rick Derringer’s latest record, Knighted by the Blues, is an amazingly varied album from a guitarist who has been in the music industry for more than four decades. Highlighted by a player who’s still in top form, playing as well as ever, the disc reflects Derringer’s attitude and the fact he is both confident moving forward and comfortable reflecting on his remarkable career.

How did the idea for Knighted By the Blues come about, and did everything come together as you were expecting?
Well, it was made for Mike Varney’s label, and I’ve done others for Mike, and each time he gives me a little more freedom to do it the way I think it should be done. This was the first time he said, “You don’t have to come to California. You can do it in the studio where you usually work and use whatever musicians you want. I won’t even tell you what songs.” So it was the first time he completely gave me the reins. He does call them blues albums, but Mike Varney’s idea of the blues is not strict blues. He likes things a little over the edge and high-energy. So I was able to stretch a little bit. I don’t think he would have recommended a song like “Funny, I Still Love You,” and I know it’s problematic getting license for a Jimi Hendrix song, so I know that he wouldn’t have encouraged me to do “If 6 Was 9,” but since I had a little freedom, I did those songs, and he really liked it.

I also had an opportunity to play with a couple of great players – they’re brothers – Dave Reinhardt plays the drums and Ron Reinhardt plays keyboards. They’re a couple of the best I’ve ever played with, on any album. They’re just a pleasure to work with, and it was a real privilege. Same goes for the engineer I work with in Florida, George Harris. He’s one of the best.

One of the great things about the record is its mixed bag of music.
It’s always been hard for me to focus and make things one slice. I like a whole big pie. 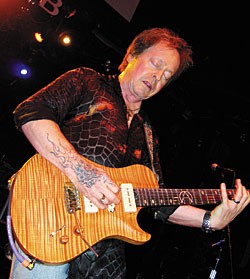 One of the beautiful things about your breakthrough 1974 solo album All-American Boy, was that it was so varied.
The record companies always come back with, “Hey Rick, you could have had a lot more success if you would have just focused on that rock and roll.” So they weren’t always happy with what I did, but I think it helped me attain a longevity that some other bands didn’t have.

Given your well-rounded approach one would assume that when you were learning, you listened to everything?
I did. When I was a kid, my folks had a huge record collection – Les Paul and Mary Ford and a lot of country, Merle Travis, Chet Atkins. And then on the other side they had Wes Montgomery and stuff like that. So I really had a well-rounded start. But it wasn’t long before Elvis broke through and I was really struck with rock. And when you start playing, of course, you want your friends to be just as excited as you are, so one of the best things about playing guitar is winning friends and influencing people. So I really concentrated on a lot of rock.

Speaking of friends, you’ve had plenty in the biz involving names we all know. Did your early start lead to those relationships?
Yeah. That’s really it in a nutshell. We were told by our parents you wouldn’t have enough success as a musician to really make it, so you’d better have something to fall back on. I was going to be an artist – I was enrolled in the Dayton Art Institute. I was accepted and ready to go, but that summer we recorded “Hang On, Sloopy” and I ended up not going to art school. It was a surprise that we had that kind of success and did kind of just fall into it. I realized right away that it wasn’t something that necessarily happens to everybody. I was tenacious about hanging on to it. I like the music business. I love writing, producing, playing, concerts, the studio – I love it all.

Must have been a real eye-opener for a teen to be opening for the Rolling Stones?
We did everything. We went around the world. People inevitably ask about Johnny and Edgar, and I love them and they’re doing great, but what most of those people don’t know is that I’d already been touring around the world before I ever met them. 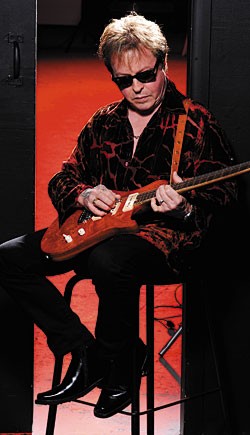 Edgar pops up now and then in situations you least expect him.
Well, he lives in Hollywood and has access to those high-visibility situations. There’s no telling where he’ll turn up. Me, on the other hand, I live sometimes in Florida, sometimes in New Mexico, and sometimes in Tennessee. I kind of drift around. The closest to the music business is Franklin.

How did you end up co-writing “Hold” with Patti Smith on All-American Boy?
We were friends, and we’ve co-written several songs. Steve Paul, who was my manager at that time, had a very eclectic view of the world and sat in a kind of interesting place in New York City. He had a club where a lot of people came, and he was really into the art scene. Patti was, at that time, Robert Maplethorpe’s girlfriend. We were kind of immersed in that whole world of poetry and art, and Steve encouraged us to write together. He thought it would be a good combination, and I enjoyed it.

How did you end up as one of the many wonderful guitarists who played on Steely Dan albums?
While I was living in New York City, which I did for 26 years, I had the opportunity to meet and play with a lot of people. One day a guy named Gary Katz (longtime Steely Dan producer) called and said, “I’m going to produce some demos to try and get this guy a record deal.” I asked who it was and he told me the guy’s name was Donald Fagen. He asked if I’d play on the demos, and I said “Sure.” They called me after their first record was successful and asked me to do more work with them, which I did. I played on a lot of their records. I don’t even really know which songs because they didn’t always list credits. But I played a lot of rhythm for them, and ended up playing on Donald’s solo album, The Nightfly, too. I enjoy playing with those guys any time they call.

Do you produce anyone else these days?
I love to work on my own stuff now more than anything, but that doesn’t mean I wouldn’t do other projects for other people. I’m not as into speculating on artists who aren’t well-known and need record deals. That stuff’s getting harder and harder all the time. But if a record company calls and tells me they have a great artist and a budget, I’m certainly apt to say yes to that situation.

Are you doing any studio work these days?
Yeah, sure. One of my favorite solos I ever played was on the Air Supply song “Making Love Out of Nothing At All.” Whenever I hear that on the radio, I tell my friends the solo is coming up and it’s cool (laughs)! Russell Hitchcock, the main voice of Air Supply, has been working on a new CD and they asked me to play on a couple of songs. There was one I really liked that sounds like it should be one of those big pop/country crossover hits.

Were you in a lot of studio situations during that time?
Quite a bit. Bonnie Tyler’s “Total Eclipse of the Heart.” I played all guitar parts on that album (Faster Than the Speed of Night). I played on everything from Streisand to Kiss – all kinds of things.

I’ve talked to a lot of players who played on Kiss records that you’d never expect.
Well, they really wanted to make hits. And they reached out to a lot of good players to make those records.

In the last several years you’ve worked with builders to design signature guitars and amps.
I used one guitar on this whole record – the Rick Derringer signature model I worked with Warrior to design and create. We started working together six or seven years ago. What they allow for me is the hands-on ability to create a guitar; I think of changes that might improve it, and they try them. If we both like the results, they’re incorporated.

For my amp, I wanted to create a Rick Derringer-style amplifier. Four or five years ago, I started working with some designers and made some great amps. One of them really stood out, made by VVT – the Hyperdrive. I used it on 90 percent of the record. 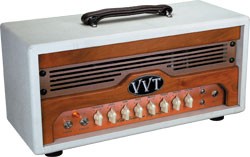 Is there a guitar you’d compare your signature model to?
It’s really hard. Over the years, I’ve played a ES-355, Les Pauls, a Strat, Steinbergers, B.C. Rich, and PRS guitars. Paul Smith made some beautiful guitars for me. So what we tried to do was take the best of all those instruments and create one that could compete with all of them.

Did you keep any of your old guitars?
Yeah, I still have the ’65 Strat I used on some records. And I have the world’s cleanest ’66 Strat. It’s sunburst, and most who see it think it’s a reissue. I also have a two-pickup wide-body Paul Reed Smith. It’s beautiful.

Your music is living into the next generation thanks to a certain video game. Teenagers everywhere are huge fans of “Rock and Roll Hoochie Koo.”
The younger crowd all knows it now from Guitar Hero. I was in an Indian restaurant the other night, and I told the waitress I’d eaten Indian food all over the world and told her theirs was really good. She asked me why I’d eaten it all over the world. I told her I traveled because of music. She went, “Oh, are you big?” I realized I was talking to a 17-year-old and told her I had a song on Guitar Hero. She was all freaked out when I told her it was “Rock and Roll Hootchie Koo,” and said she played that one all the time. So it’s cool that a whole new generation is getting into some of that music.

Ode to the King of the Blues