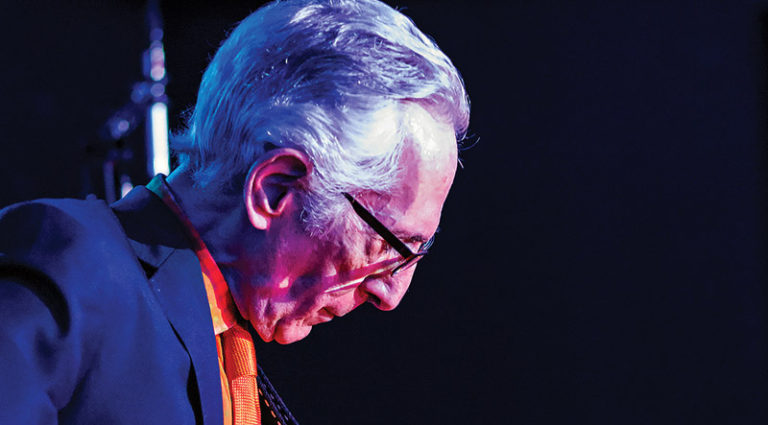 Pat Martino is a legend. He has been delighting the globe’s collective ear for more than 50 years, making an undeniable impact on guitarists across the spectrum; Pete Townshend, Carlos Santana and Jerry Garcia are among his fans, along with (predictably) countless jazz performers. His credits read like a who’s who, and he has innovated and proved convincing within every corner of the genre from mainstream, bebop, and soul-jazz to post-bop, avant garde, and fusion. His singular approach, formidable technique, and unbridled imagination guarantee his place in the pantheon of guitar immortals.

In his journey, Martino has lived three lives. He emerged from the highly competitive East Coast scene and became a sought-after sideman by 1962, revealing a range unimagined by his forebears. As band leader beginning in the late ’60s, he subsequently redefined the sound of jazz guitar on a series of ambitious albums for Prestige and Muse, culminating in a major-label stint with Warner Brothers. Each marked a logical progression from a technically gifted/Wes-influenced firebrand to a diverse and mature artist of immeasurable range.

Tragedy stuck in 1980, with a life-threatening brain aneurysm. Pronounced legally dead at one point in surgery, Martino was sidelined for nearly a decade, during which he had to re-learn music and the guitar.

The Return (1987) represented the beginning of the next phase. Though tentative by comparison with later works, it testified to Martino’s resilience and presaged a triumphant re-entry to music. A creative and productive deluge followed over the next three decades with a succession of captivating albums epitomized by Interchange, The Maker, Stone Blue, Live at Yoshi’s, Remember, Undeniable, Nexus, and Formidable. Per his modus operandi, each embodied a unique tangent, with his sound and approach being constants.

Bob Benedetto is the leading luthier of the jazz world. Devoted to creating instruments in the D’Angelico tradition for players like Johnny Smith and Kenny Burrell, he has been drawn to jazz from day one of his career. Though most of his creations are traditional hollow archtops, he has demonstrated range and flexibility with his Benny solidbody and Andy short-scale models, along with specially commissioned custom guitars.

In 2018, chronic obstructive pulmonary disease (COPD) forced Martino to curtail performances and teaching, exacerbated by the pandemic. A GoFundMe campaign drew many donors, but eased his financial difficulties only temporarily. Benedetto stepped forward with a one-off collectible guitar (serial number S2688) that sold for $15,000, with proceeds aiding Martino. It boasts numerous features distinguishing it from its production counterpart, including gold hardware, bookmatched maple top, flame-maple binding, ebony faceplate, inlaid Benedetto logo, Tone and Volume controls for each pickup, and a toggle selector. The back and neck are finished in sunburst rather than black.