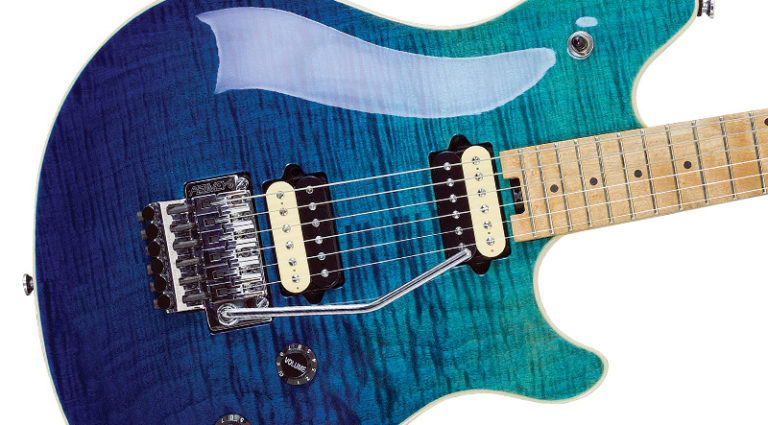 Introduced in 1996, the EVH Wolfgang was an evolution of Eddie Van Halen’s previous models from Music Man, Kramer, and Charvel. Today known as the Peavey HP2, the guitar is a reminder of Ed’s gear innovations, including the blend of superstrat functionality with a maple-top solidbody.

The HP2 has a basswood body and carved maple top, which accounts for the substantial weight (8 pounds, 12 ounces for the tester). Its birdseye-maple, bolt-on neck has a 25.5″ scale with an alluring oil finish, while hardware includes Peavey humbuckers screwed into the body (per EVH’s instructions), and a down-only Floyd vibrato bridge that sits on the wood. Look for staggered Schaller tuners with a straight-string pull, locking top nut, and a Switchcraft three-way toggle. Master Volume and Tone controls keep things simple.

Plugged in, it’s hard not to be impressed with the HP2. The easy-to-grab neck has a flat radius and fast setup for effortless shredding punctuated by taps and Floyd whammy jabs. Sure, the HP2 is a pricey axe, but its superior neck and fretboard setup deliver on the promise.

Perhaps most startling about the HP2 and its “best of both worlds” concept is in the tone department. Using the bridge pickup with substantial gain gets you right into the VH universe, with hard-rock tones aplenty. The lively humbuckers are meaty and bright; even crunchy chords pop. The neck pickup delivers surprisingly fat “woman tone” à la Cream-era Clapton. For even more fun, pull up the Tone knob to tap the bridge pickup for twangier tones.

If you love heavy rock and killer craftsmanship, the HP2 will dazzle. It’s a serious beast that rocks the universe.