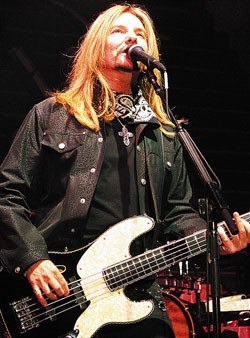 Most professional guitarists or bassists, upon reaching a certain level of success, are seen as “Les Paul guys,” “Precision guys,” or in one case, simply “Mr. 335.” Others, fond as they may be of classic axes, are known for stepping away from the treadworn by adding custom touches or working with a manufacturer to build a guitar to their own specs.

By the end of the 1980s, Bad English bassist Ricky Phillips was one such player who worked closely with a big-name builder – Fender – to develop an instrument with specs and features specific to his taste. Now, almost two decades later, the bass is still serving him well in Styx.

Working closely with Larry Brooks, then a luthier in Fender’s Custom Shop, Phillips designed an instrument that combined his love of late-’60s Telecaster Basses with such sonic innovations (for their day) as a low B string and active electronics.

“Five-strings back then were basically for jazz guys, and looked like a piece of furniture – different woods, grains, multiple layers,” Phillips recalled. “There was no rock and roll five-string bass because rock and roll guys didn’t play five-strings. I tried to design something that I would be proud to play onstage, as a rocker.”

In addition to the Tele Bass influence, Phillips interpolated a single f-hole into his design, having garnered creative inspiration from a Telecaster Thinline that Bad English vocalist John Waite owned when he and Phillips were in the Babys. He also requested a matching headstock and – in a first for the Fender Custom Shop – specified checkerboard binding, recalling his love of Rickenbacker basses.

“Initially, I wanted the binding to go all the way around the headstock,” he recalled. “But I decided it would look kind of cheesy, so we just did the neck and the top edge of the body.”

The bass’ nut is made of bone, though Phillips and Brooks considered various metals, including brass.
“I like the sound with brass nuts and bridge saddles,” Phillips said. “It’s kind of twangy and cool, but I didn’t get some of the warmth for the sound I need, so we went with bone.”

The bass uses a neck-through design with alder body wings, and sports an ebony fretboard with no markers. Phillips allowed Brooks to choose the fret wire that worked best with the ebony fretboard. Scale is a standard 34″.

The f-hole, bound in solid white, runs nearly the full depth of the body, although that wasn’t Phillips’ intent. “I kind of flipped out when I stopped in to check the progress on the bass,” he recalled with a laugh. “I saw that Larry had cut out an entire chamber, and I’d just wanted something cosmetic on the top – just the aesthetic. I really got upset, but as it turned out, it in terms of tone, it was a true accidental plus.”

Phillips didn’t specify hardware, so Brooks used stock Fender parts, though he praised the company for acceding to his request for EMG active pickups instead of those sold by Fender.

“The instruments with passive electronics – particularly those from the ’50s and ’60s – are still the ones I think sound best,” he detailed. “But when you’re playing with an arena band, an active bass’ sound can get through. I’d been playing Spectors, and loved the EMG pickups; that’s true to this day. But Fender couldn’t have been cooler in letting me install Jazz-style EMGs. They wanted to get it right and make me happy, and I respected them for that.”

For its many traditional elements, the EMGs and their controls mark a departure. “The first control is a Volume knob,” Phillips noted. “Next is a pickup pan knob that’s notched in the center – when you’re singing, and playing, and making changes, even slight, it’s nice being able to feel it instead of look. It becomes a natural thing, and it really helps. The last two knobs are a Tone controls for each pickup.”

Phillips chose black with a white mother-of-pearl pickguard, possibly as a subliminal reference to monochrome television, as the vibe that he was trying to create ties in with vintage TV image recollections.

“I become a kid again – a 12-year-old watching the Beatles or the Doors on ‘Ed Sullivan,'” he chuckled.

Phillips recalls the Bad English gig where he first used the new bass as “…phenomenal. Everyone was really pleased with how it sounded, and it also became my main recording bass. I used it a lot with Coverdale/Page, including on that band’s first single, ‘Pride and Joy’.”

The bass has proven extremely durable, having never gone back to Fender for refurbishing or repair. “As much as I beat the crap out of it, you’d think it’d be seriously worn,” Phillips reflected. “I’m absolutely amazed at how solid it is – it’s built like a truck.”


This article originally appeared in VG‘s April 2009 issue. All copyrights are by the author and Vintage Guitar magazine. Unauthorized replication or use is strictly prohibited.
Styx- Blue Collar Man