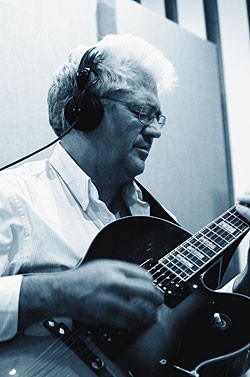 In the mid ’70s, the guitarist grabbed a Hagstrom Swede and formed the funky Eleventh House; later in the decade, Coryell could be heard playing lush artificial harmonics on Ovation roundbacks. But for the last 25 years, the guitarist largely returned to his straight-jazz roots, touring the globe, and recording steadily. A few years back, however, Larry Coryell revisited his fusion roots at a red-hot gig in LA. Today, that music is available as the CD Earthquake at the Avalon and it also features guitar work from his son, Julian, and, surprisingly, Los Lobos’ David Hidalgo.

Earthquake at the Avalon contains some pretty explosive guitar work.
The Earthquake gig was a retrospective of my early fusion work, which included vocals and strange originals. The gig was really a positive journey back into time to re-explore and recreate these early works. I knew David’s playing from Los Lobos, but I got the lowdown on how good he really was from my son Julian – they both live in LA. Julian told me David had some Hendrix in him, so that was more than good enough for me! The allotment of the guitar parts was organic; each guitarist quickly found where their role was located and everything flowed naturally from there.

What guitars did you use on the album?
I played a white Les Paul Standard that was originally mine, but had given to Julian. I also played Julian’s Hamer Daytona. But my favorite jazz guitar is still the Gibson Super 400.

Is your normal jazz rig different from the Earthquake setup?
My normal jazz rig is basically any decent tube or solidstate amp – the older the better – with little or no reverb. I used to use chorus and some digital delay, like when I played with [drummer] Lenny White and [bassist] Victor Bailey, but most recently I plug straight in and play with the most natural sound. I also like Henriksen Jazz Amps.

You were a big proponent of Hagstrom solidbodies and Ovation acoustics back in the ’70s.
You know, the Hagstrom came into my life around ’73 because my managers at that time made a deal with them. I kept the Swede for a long time, but about 12 years ago, I gave it to one of my students. I also liked Ovations back then, but now I’ve gone to all-wood acoustics. The Ovations were pretty durable, so they made good road guitars. I still have an Adamas in the back room, but I don’t play it. They make a great 12-string, but it’s really hard to play at my age. 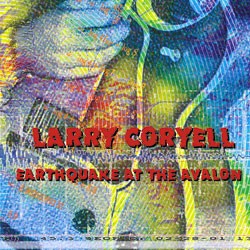 Larry coryell – Earthquake at the Avalon

Do you have any vintage guitars?
If the Super 400 is a vintage guitar, then that’s it – I am not a collector. I always felt that the instrument itself is simply a piece of wood and metal. I do have a nice Rodriguez flamenco that was a gift from [jazz producer] Creed Taylor. It has a great sound, but it’s hard to keep in tune because of its wooden tuning pegs.

Looking back at the heady fusion days of the ’70s, what are your recollections?
The short answer is that fusion had a lot of good playing, some memorable compositions, and it helped the rock crowd come over to jazz. In my opinion, tunes that are original and somewhat complex, like Mike Mandel’s “Level One,” still hold up very well. If you want a complete answer about fusion, read my autobiography, Improvising: My Life in Music [published by Hal Leonard].

Who moves you now?
Anything that sounds good, and it can come from recognized players or newcomers – if the playing is good, I’m moved. I think John Scofield is a good player, as well as John Stowell, George Benson, and Bireli Lagrene.

In your opinion, where does classic “jazz guitar” stand in the 21st century?
Jazz guitar stands out in this century as an instrument that went from the background to the forefront. The evolution of the jazz guitar, beginning with Charlie Christian, transformed the humble Spanish instrument into a major force for connoisseurs of jazz. Much of the credit goes to disciples of Christian, like Barney Kessel, Herb Ellis, Jim Hall, Kenny Burrell, Wes and Tal – they’re the ones who got it going. Then Scofield, Metheny, and others came along and took it forward, keeping the jazz-guitar tradition intact, but attaching relevant new elements along the way. To me, you just can’t beat it.


This article originally appeared in VG‘s June 2009 issue. All copyrights are by the author and Vintage Guitar magazine. Unauthorized replication or use is strictly prohibited.
Larry Coryell: A Retrospective [Slow Blues]