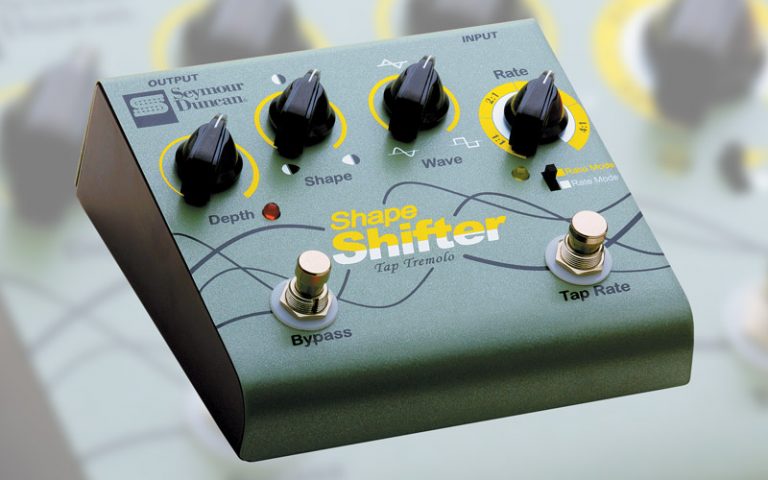 Seymour Duncan’s reputation when it comes to pickups (from dead-on vintage replicas to his own designs) has been well established for decades. And anyone who’s had the pleasure of hearing him play knows he’s not just an electronics geek.

With the Shape Shifter Tap Tremolo, he adds to his line of stompboxes something guitarists have been searching for for decades: a wide range of true vintage amp tremolos as well as more modern, even radical, effects in a sturdy outboard unit.

Want to sound like Duane Eddy or Bo Diddley? Maybe the Electric Prunes’ classic “I Had To Much To Dream Last Night” or Jimmie Vaughan doing “Scratch My Back”? No problem.

The concept behind the solidstate Shape Shifter is to achieve all of the manipulation of a digital brain while keeping the signal path 100 percent analog. As company vice president Evan Skopp explains, there is none of the compromise associated with analog-to-digital converters.

Of course, the proof is in the pudding, and in A/B tests with various classic amp tremolos, as well as experimenting with what the instruction manual describes as “flutters, shimmers, warbles, and helicopter chops,” the Shape Shifter met or exceeded expectations.

Amps used to put the Shape Shifter through its paces included a ’57 tweed Fender Vibrolux, a mid-’60s Silvertone 1484 “Twin 12,” and ’61 blond Fender Showman head through a blond 2×12 Bandmaster bottom. (A late-’50s Magnatone 260 was also on hand, but the Shape Shifter doesn’t really attempt to reproduce the Magnatone’s wobbly, pitch-shifting vibrato. If you want to sound like Lonnie Mack, you’ll have to look for another pedal or find an old Magnatone.) Instruments used were a ’64 Fender Jazzmaster, a late-’60s Gretsch Tennessean, and a ’99 DeArmond Bajo Jet baritone guitar.

The unit, which measures approximately 5.5″ square, is built like a tank, out of 16-gauge metal – weighing in just under two pounds. The base’s sloped face is 2″ deep at the rear, 1.25″ deep in front, not counting the knobs, which are laid out Depth, Shape, Wave, and Rate, left to right. Below those “chicken-head” pointers are stomp switches for Bypass and Tap Rate (more on that hip feature in a minute), and the single Input and Output jacks are placed along the back panel (or top edge). A red LED shows that the unit is engaged, and blinks to coincide with the Rate/Ratio (speed) setting, while a slider switches from Rate to Ratio mode, with a green LED indicating when Ratio is being employed.

It can be operated with an internal 9-volt battery or external power-cube adapter. Duncan electrical engineer Wayne Rothermich says that, with typical use, a quality alkaline battery (like Duracell or Energizer) should last about 100 hours.

In terms of replicating amp tremolos, the most surprising results came via the Showman/Bandmaster hybrid. A junction box built by Austin amp technician Bill Ussery was used to first get the amp’s Normal and (misnamed) Vibrato channels to sound as identical as possible with no tremolo on – Volume on 4, Treble on 10, Bass on 5.25 (5.5 for the Vibrato channel), Presence on 10.

Then the tremolos were matched as closely as possible. The Showman’s Speed was a hair past 6 with the Intensity all the way up. Except for the Rate knob’s Ratio settings, the Shape Shifter’s controls have no numbers, but the Depth was between 11:00 and midnight, with the Shape and Wave settings straight up, and the Rate also between 11:00 and 12:00.

Running through every tremolo song that came to mind (“Rebel ‘Rouser,” “Harlem Nocturne,” “Rumble,” various Slim Harpo and Bo Diddley tunes), while clicking the junction box back and forth, from Vibrato channel to Normal with Shape Shifter, the sounds were so well matched it was impossible to tell them apart (or, eventually, remember which channel was engaged). Which is exactly the objective – or at least one objective. The Shape Shifter doesn’t alter the amp’s tone and, if desired, can uncannily duplicate its tremolo. If you want to tweak it further, that’s up to you.

Both the solidbody and hollowbody sounded great, but the baritone (its bottom string an octave below a standard guitar’s low A) was downright awesome – like Duane Eddy on steroids.

Changing the Wave from triangular to smooth yielded a deeper fluctuation. While no longer identical to the Showman’s Vibrato setting, it was also attractive. The Shape Shifter’s manual suggests splitting the difference between the two waves for “classic American trem,” while finding the midway point between triangle and square for “classic British trem” (it also shows the Depth at 9:00 for both).

The manual additionally pictures settings for such out-there effects as “backwards,” “faux piano,” and “seizure.”

The Shape controls the rise and fall of the tremolo’s pulse. At 12:00, it decays at the same speed as it increases. Hip features of the Bypass switch are that it engages silently, doesn’t just “turn off” but completely removes the circuit from the guitar’s signal chain, and goes into sleep mode when bypassed, to preserve battery life.

The Tap Rate control is one of the 07’s hippest features, especially in Ratio mode. Stepping on the switch twice, in time with the music, establishes the tremolo speed’s 1:1 ratio. The player can then dial in 2:1, 3:1 (triplets), 4:1, or anywhere in between. So, assuming one can tap his or her foot in time with the song, this removes the guesswork of, in the manual’s words, “trying to sync your trem pulse to a song’s groove.”

All of the SFX’s controls are continuous and smooth, and one of the few improvements that come to mind would be to employ notches (or “clicks”). Normally, this isn’t the most desirable, but because the Shape Shifter has such a wide range (its Rate goes from one to 20 beats per second, and the Depth is equally sensitive), a slight “adjustment” (like a cord or pant leg brushing against one of the pointers) can throw you into a whole new sonic ballpark. Plus, exact settings would be easier to remember – instead of approximations like “between 11:00 and midnight” cited here.

Also, instead of unscrewing the entire back panel to change batteries (which, besides the inconvenience factor, unnecessarily exposes the unit’s guts), a flip-up battery door would be nice.

Otherwise, everything about the Shape Shifter spells quality, from top to bottom, at a very reasonable price. – Dan Forte