Home Music Junior Sisk – Blue Side of the Blueridge 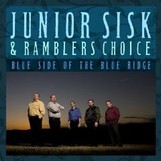 Being a top-echelon professional bluegrass musician is similar to being a member in an exclusive underground club. The members all know each other from their not-so-secret handshake, which is the ability to play bluegrass right. All the personnel on this disc are clearly in this select company.

As the world continues to shrink, the concept of a “regional sound” has become increasingly rare and archaic. But Ramblers Choice tries to retain what they refer to as southeast Virginia bluegrass. Their sound relies less on breakneck rhythms and more on loping tight/loose arrangements that have a comfortable and well-worn feel. Sometimes, the lead singer leads the pace, other times (even within the same song) Sisk will hang behind the beat in the Lefty Frizell/saloon-singer tradition. Their ability to play with the beat and pace of a song gives Ramblers Choice an older and less polished edge that is refreshing, especially when compared to some of the ultra-slick bluegrass bands such as Rhonda Vincent’s The Rage or Ricky Skaggs’ Kentucky Thunder.

Produced by veteran bluegrass producer and singer Ronnie Bowman, production never distracts from the music. Ramblers Choice delivers great bluegrass without showbiz glitz, which is what bluegrass is all about.