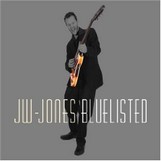 On his latest album, Jones proves a master of several styles of American music, and is joined by other impressive guitarists to purvey it.

Jones goes toe-to-toe with Little Charlie Baty and Junior Watson, and more than holds his own. The three share the spotlight while picking on cuts like “Double Eyed Whammy,” a great ’60s-style soul tune driven by guitar solos and a great lyric. While soul music pops up frequently, the blues are the main driving force here on cuts like “That’s Wrong Little Mama.” The three guitars dominate. “Waiting on You” is a perfect example of Jones’ considerable playing skills. It’s a simple boogie with a great lyric and a solo that shows him taking his time, unlike many younger players. “Mad About You” is a rave-up with Jones entering the solo like a long-lost descendant of T-Bone Walker, and following up with clever choices of notes and fine right-hand theatrics. “Looking the World Straight in the Eye” is a gritty minor-key blues with stop-time licks, a great sound, and huge vibrato.

Vocally, Jones continues to mature. He understands the music, writes good songs, and once his voice catches up to the rest of his talents, he just might set himself up to thrive on the R&B scene.

Emmylou Harris – All I Intended To Be