Home Music Rick Fowler – Back On My Good Foot 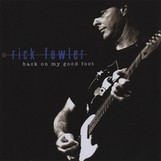 The closing, extended version of Savoy Brown’s “Hellbound Train” is this set’s only cover, but it may be the set’s most revealing track. With so many blues guitarists aping the Vaughans, it’s refreshing to hear somebody wear his British blues influences on his sleeve.

Atlanta-based Fowler is backed by organist Randall Bramblett’s group on much of the record (with bassist Michael C. Steele and drummer Gerry Hansen), but R.E.M. drummer Bill Berry guests on “Hellbound,” with Fowler achieving a fat sound that would do Kim Simmonds proud.

Also, “Infused With The Blues” reveals the influence of Savoy Brown vocalists Chris Youlden and Dave Walker, while “Skeletons In Your Closet” features a pumping “Crossroads”-type riff, and the spare slow blues “Feel So Much Better” mines Peter Green territory, in terms of tone and economy.

There are times when the repertoire descends into standard bar-band fare, as on the so-so title track, and the acoustic “Hitchhiking” sounds like an unfinished sketch. But the Hooker/ZZ-ish “Road To Nowhere” and the Strat-y “Walk Softly” are good, old-fashioned, unadorned blues.

The No Refund Band