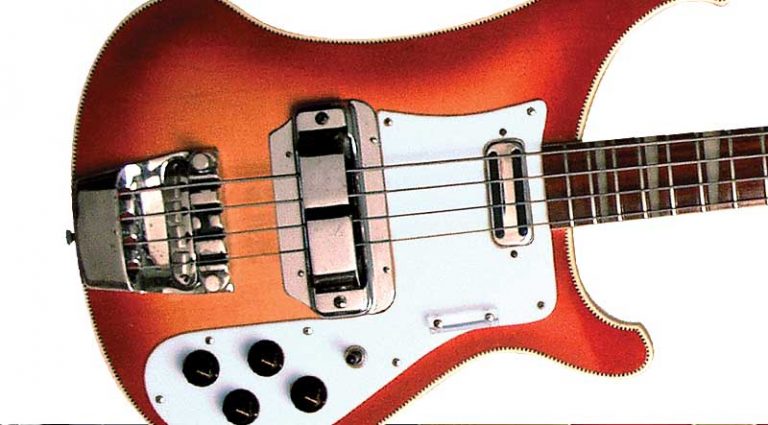 In the January and February installments, we looked at Gibson’s Thunderbird, an instrument condemned by its maker to a quick demise only to be reborn due to late-blooming popularity. Another early bass represents a flipside to that tale – one that was in production for years before becoming a major success.
Most players today are familiar with the Rickenbacker Model 4001, which since the early ’70s has been one of the most popular basses. But few realize its roots reach back to the ’50s.

The modern Rickenbacker story begins in 1953, when F.C. Hall had been very involved in Leo Fender’s early success, as his company (Radio and Television Equipment Company, or Radio-Tel) handled the distribution of Leo’s products. Hall saw a profitable future in electric-guitar sales, but he and Leo had a strained relationship, so Hall looked into establishing a brand he could control. Adolph Rickenbacker’s small and nearly moribund steel-guitar-and-amplifier operation, dating to 1931, was an easy in to that end of the business, since the aging Adolph was eager to sell both the trade name and the factory.
After Hall purchased Rickenbacker, Leo felt he was competing with Fender while acting as a distributor. Leo and head Fender salesman Don Randall found the situation untenable, and in ’55, Hall was edged out of Fender. Still, with his own already-established brand and small (but experienced) production facility, Hall remained in position to exploit the growing market for electric instruments.

This included a still-unproven concept – the electric bass. Radio-Tel initially had the uphill job of marketing the Fender Precision, a revolutionary product, but hardly an instant success. And despite its slow start, Hall surely saw its potential. Still, it was several years before the newly reorganized Rickenbacker put forward a similar instrument (which even so, was not the company’s first bass). Rickenbacker briefly offered one of the very first electric basses; derived from the upright, the ’35 Rickenbacker bass had no acoustic body, just a fingerboard and pickup mounted to a cast-metal frame. It was not a market success, and disappeared before World War II. Seeing Fender’s growing sales of the guitar-like Precision, Hall no doubt encouraged his staff, including German-born luthier Roger Rossmeisel and factory manager Paul Barth, to devise a suitable design. What emerged was very different from not only the Fender, but anything else built at the time, with elements already used on some of company’s guitars combined in a novel way.

Introduced in the spring of ’57, the original Model 4000 is the ancestor of all subsequent Rick basses. It was the first long-scale challenger to the Fender Precision, a strikingly original design that still looks modern today. Rossmeisel is generally credited with the overall look, though Barth and Hall had input, as well. Beyond pure aesthetics, the Model 4000 has an unusually clear, high-fidelity sound that took years to emerge from muted, flatwound ’50s tonal expectations. In the ’70s, Rickenbacker billed the 4001 as “The instrument that moved the bass player to center stage” – in ’57, that was simply not a place bassists were expected to be!

The Model 4000’s most important construction element was a solid neck-through-body centerpiece, with body and headstock sections glued to it – a method already in use on some Rickenbacker guitars. The extended neck had a 331/2″ scale, slightly shorter than Fender’s 34″. The body shape was described as “extreme cutaway,” making all frets accessible. Visually, the resulting curve was a radical step beyond Fender’s form-follows-function design. Much of the face of the body was covered by a large, gold-backed lucite pickguard shaped in a sweeping upward curve. At the other end of the neck, a large, sculpted headstock carried big Kluson upright tuners and a gold lucite logo plate. This headstock subtly mirrored the body shape – an elegant aesthetic touch. The center neck/body unit was initially carved from mahogany, then walnut was tried, and finally, maple, which by 1960 proved the hardiest material. This neck was reinforced with a novel double-truss-rod design, the work of engineer Paul Barth, who likely designed much of the hardware for the 4000. Some elements resurfaced on his ’59 design for Magnatone, the short-lived Mark VI Bass – the 4000’s only “relative.”

Compared to its radical body styling, the Model 4000’s electrical equipment was hardly novel. In fact, it was little changed from George Beauchamp’s original 1931 pickup design – a coil with large horseshoe magnets surrounding both it and the strings. Despite its venerable origins, this unit gave a rather direct hi-fi sound, described by Rickenbacker as “Uniform volume of true tone quality for all notes…” whatever that means! Oddly, this famously brightest-sounding of basses does not actually have a “treble” pickup – the horseshoe unit was mounted in a position similar to the pickup on Fender’s Precision. Between its natural brilliance and the instrument’s maple construction, the 4000 and subsequent models maintained a clear, crisp response without needing a pickup nearer the bridge.

Another feature with a slightly leftover feel was the bridge, built from the guitar unit, including the base plate with six string holes and six-string adjustable section, but only four saddles. Within months of its introduction, the Model 4000 received its first alteration – an adjustable mute. Mounted inside little clear plexiglass rails, the chrome bridge cover could be moved forward, pressing its foam mutes over the strings. It looked a little awkward, but worked fairly well. Fender’s bass had foam permanently attached under the bridge cover, and could be disengaged by removing (or on early basses, reversing) that piece. Rickenbacker’s was the first adjustable system, and perhaps indicates that initial response from players was that the 4000’s sound could use a toning down!

The Rick also felt fundamentally unlike any other bass. Easily the most abstract design of the group, its “neck-through” construction would eventually prove very influential. At the time, though, it was hardly a commercial success; the exact number shipped is open to debate, but was miniscule compared to the competition.

The Model 4000’s most visible initial user was James Kirkland, bassist in Ricky Nelson’s on-screen TV band. Rickenbacker secured an endorsement with the Nelson organization, so Kirkland and lead guitarist James Burton often appeared with the company’s instruments when Ricky did his musical numbers on the family’s TV show. Of course, in the recording studio, Burton played a Fender Telecaster, but this connection was Rickenbacker’s first exposure to a mass rock-and-roll audience, and a warm-up for the ’60s. Country star Jim Reeves’ band, the Blue Boys, endorsed Rickenbackers for a while and appeared with a specially made powder-blue set circa 1960. Buck Owens’ band reportedly were early testers, along with more-obscure acts like the Miller Brothers Western Dance Band. Generally, the first Rickenbacker basses appear to have primarily gone to acts that were using/endorsing a full Rick lineup, rather than bass players who selected them independently.

One oddity in this period’s Rickenbacker history is a relative dearth of promotional materials. Fender issued yearly catalogs in the ’60s and Gibson would come out with something every couple of years, but subsequent to the ’57 catalog, Rickenbacker used the same rather stingy one-leaf foldout from 1960 through ’68. This brochure was seriously out-of-date by the Beatles rush of ’64; not only were the guitars pictured no longer representative of the models being sold, but the bass was given only a small, half-tone illustration on the back. It’s little wonder few players were sold on the Rick bass – even the maker showed little interest!

Starting in ’61, the bass began to show structural evolution. The slab-sided body was slimmed and contoured, making it lighter and more comfortable. The chunky neck was also slimmed, and compact Kluson tuners added, allowing the headstock to be made smaller, as well. With these changes, the 4000 became sleeker and easier to handle. The new Fireglo sunburst finish became standard, with natural and solid color options available. Basses from ’62 have the lighter body with the long, gold pickguard covering most of the face, an extremely rare combination. By ’63, the pickguard was restyled into the now-familiar version, in white. This accompanied another noticeable change – a new cast-metal tailpiece replaced the old leftover guitar pieces. This large chrome-plated piece remains a distinctive feature today, though some players find it awkward. The casting incorporated the tailpiece – a separate, adjustable bridge drop-in and, in front, a new dial-up mute (conveniently using two of Rickenbacker’s proprietary strap buttons as dials). This was probably the most useful such period device, especially since the bridge design made palm-muting somewhat difficult.

At the end of ’61, Rickenbacker took another big step on the bass ladder with the addition of the 4001. Even more visually striking, it was essentially a 4000 dressed with Rickenbacker’s deluxe guitar features – a checkerboard-bound top, bound neck, and large triangular fretboard inlays, plus a second pickup (a standard guitar “toaster-top” unit mounted close to the neck, not a specially designed bass pickup). A very few circa-’61 experimental single-pickup basses were built with deluxe features, but the idea was not followed up. The 4001 was the first high-end electric bass with this level of flash. Fender had introduced the two-pickup Jazz and Gibson followed with the EB-3, but neither carried the ornamentation of the 4001. But, was there a market for a bass that was flashier than most guitars – and more expensive than many?

How many of these Rick basses were built, then? Production from this era is not fully documented. Richard Smith’s 1987 book, The Complete History of Rickenbacker Guitars, tabulates figures for the ’50s and ’60s, but Rickenbacker says the totals listed were based on incomplete information, with actual numbers being somewhat higher. Even allowing for that, production estimates for all Rickenbacker basses before ’64 are astoundingly low for such a well-known instrument – likely not more than a couple of hundred.

A few features evolved into the mid ’60s; the square neck heel was rounded off, and the fancier 4001 gained silver-top knobs in ’64. One subtle variation is slightly different styles of horseshoe pickup flange, which often looked like leftover steel-guitar parts, anyway! By the end of ’63, the 4001 was recognizably modern.

With the combination of high prices, minimal promotion, and a lack of artist endorsements, the 4000 and 4001 were only very rarely seen with American players until the late ’60s. Roy Orbison’s Candymen used one on “The Ed Sullivan Show” in 1964. Before the British Invasion, to see a Rick guitar with a top act was a rarity – the basses were practically unknown. Given this relative lack of success, a large company like Gibson would likely have thrown in the towel on this expensive-to-produce design, but Rickenbacker persevered. Before ’64, Rickenbacker was still a small, specialized firm, supported by student- and steel-guitar sales while evolving its distinct professional line. They could afford to let their market develop, as indeed it did. When the Beatles phenomenon hit the U.S., Rickenbacker found itself holding a veritable tiger by the tail. Though it would be a slower process than with the 300 series guitars, the Rick bass would owe its eventual success to players “over the pond” in England, eventually becoming more popular than even F.C. Hall likely ever imagined.

Special thanks to John Teagle.