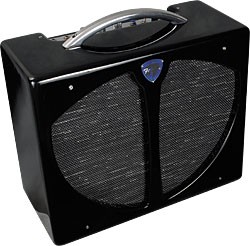 History tells us that Leo Fender wasn’t much for “fancifying” things. More meat-and-potatoes than Chicken in Walnut Curry, Leo was a simple guy, and that ethos carried over to the goods produced by his company, whose early amps were covered in tweed or plain black tolex (for flavor, sometimes brown) and guitars were mostly slabs of wood cut with no fancy arches, curves, routes, or headstock angles.

So it’s no surprise that Fender’s ’57 Amp looks nothing like anything created by Leo – and why the company touts it as something he might have built if one day he’d had a little too much coffee, caught a glimpse of a passing Caddy, and suddenly developed an eye for design.

We kid, of course…

Conceived by Fender industrial designer Shawn Greene and design engineer Nick D’Amato, along with Shane Nicholas, Marketing Director of Fender guitar amps, the ’57 Amp is a limited-edition, hand-wired 1×12″ combo that boasts several distinct features that separate it from the company’s standard amps. If you like, call it Fender’s “boutique” amp!

From its fancy, auto-inspired split grille to its piano-black-lacquer finish, knurled control knobs, sleek billet-cut-aluminum “speedboat” handle, and black grillecloth, in terms of aesthetics this is truly a custom unit. Inside, the ’57 Amp sticks to what works – its chassis is the tried and true Fender 5E3 (the technical designation for the circuit, referring to its rectifier tube) Deluxe, with top-shelf components and hand-wired construction.

One of the darlings of the vintage world, the Deluxe was introduced in 1948. It used one 12AX7 and one 12AY7 in its preamp, running into two 6V6GC power tubes. The combination delivered some of the most harmonically rich, slightly compressed sounds ever produced by thermionic valves (a.k.a. vacuum tubes). A medium-powered amp, it was designed to give guitarists enough volume to compete with drums and other instruments. And because it so adequately handled virtually any playing style, from clean country background strumming to all-out blues and rock, it has been used by players of all genres. 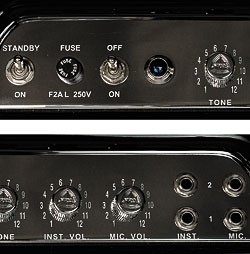 In the literature and a nicely produced DVD packaged with the ’57 Amp, D’Amato talks about listening to vintage ’50s Deluxes and newer clones as they searched for a shining example on which to base the sound of their concept.

For the sake of testing the sounds of the ’57 Amp, what could serve better than a trusty Fender guitar from back in the day – perhaps a ’59 Esquire? And for serious head-to-head fun, why not a gen-u-wine Deluxe from ’56?

To establish a reference, we first plugged into the ’56. At low volume and playing a traditional bouncy country rhythm on the Esquire, the elder amp offered the trademark uncompressed clean tone that earned its reputation – big on the bottom, crystal clear on the top. Really nice, and really mellow – fun… for a while. But for most players, the amp starts to groove for real when you take its Volume and Tone controls up to where the 6V6s start to growl (about 6). Strumming a second-position G chord (alternating with a open G and D strings for flavor – think “Honky Tonk Women”), the Esquire teams with the amp to give all the “Ahhhh, yeaahhh” tone you could imagine, its stock Jensen P12Q speaker dancing in the pine cabinet, delivering all of the Deluxe’s 12 punchy watts. Classic, unmistakable, with glorious overtones and just the right amount of gain and compression.

Sitting next to the ’56, the ’57 Amp looks shiny, new, and otherwordly, its glossy piano-black exterior in stark contrast to the aged tweed of the ’56. Its split grille does look like a badass old car rollin’ in your direction, and its aluminum handle, cap-head screws, chrome-plated tube covers, and custom-engraved big-burl knobs lend obvious custom touches.

In terms of circuit and tubes, the amp has much in common with the ’57 Deluxe Amp tweed “reissue” reviewed here in July ’07. But there are two major tone-affecting departures in the ’57 Amp; the Celestion G12 Alnico Blue speaker (the reissue has a Jensen P12Q) and a solid maple cabinet (versus pine).

Plugging into the ’57 Amp with its controls set in identical positions reveals many of the same characteristics as the ’56, but the more-efficient G12 Alnico Blue offers greater output and a tone with more lower-midrange emphasis, noticeably better low-end definition, and discernibly sweeter breakup. Any vintage-amp aficionado will tell you that time tends to work magic on speakers, and while the vintage Jensen in our ’56 Deluxe proved that to be true compared to the new P12Q in the tweed reissue, pitted against the oh-so-gorgeous Alnico Blue, the 50-year-old P12Q got a run for its money. The elderly speaker did produce a more articulate midrange, but otherwise, Blue is better!

Both the Deluxe and the ’57 Amp are wonderfully touch-sensitive amplifiers. Tweak the Volume and Tone knobs to your liking, and walk away; let your fingers, pick, pickups, and the guitar’s controls dictate the tone. The amp’s two sets of inputs (two labeled “Mic,” two labeled “Inst.”) offer subtle differences; the Input 2 set pushes the amp harder into overdrive, where you hear slightly greater compression and less note separation. 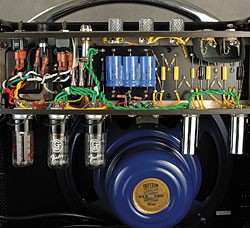 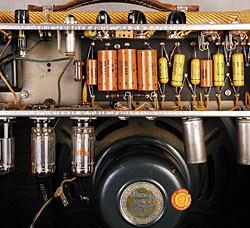 Secret Sauce
The ’56 Deluxe is an all-time classic whose rep speaks for itself. The ’57 Amp, on the other hand, is a modern showpiece with custom touches and technical upgrades that place it above virtually any mass-produced amp. And playing through both in an A/B situation reveals an obvious difference in the degree of compression and amount of harmonic overtones, especially when the Volume knobs were dialed up to our test level and beyond. And to our ears, in “stock” form, the ’56 sounded better. The ’57 Amp, though nuanced and equally touch-sensitive, has more gain, which tends to cover the overtones.

Why is this? The answer lies in the preamp tubes; the ’57 Amp uses two 12AX7s in its preamp, the ’56 uses one 12AX7 and one 12AY7. The two-12AX7 configuration sends maximum preamp gain to the power section while the 12AY7 sends a bit less, which means you hear more of the power-tube saturation from the ’56. And when you’ve learned to discriminate between the two, from a small combo amp like this, the magic (to most ears) lies in letting the power tubes do the driving. Fender did this because it could not find a supplier to provide 300 consistent 12AY7s.

For 6V6 purists, the good news is the ’57 Amp readily accepts a 12AY7 swap (as does the tweed reissue). Try it, and sure enough, it becomes a true beast, where the combination of preamp gain, power section saturation, maple cab, and the Alnico Blue speaker offer what may be the ultimate tone in a 1×12″ combo. Played clean, it’s chimey and glassy and bright. Turn up the guitar’s volume, hit it Townsend-style, and voila – rock and roll! A quick plug-in with a humbucker-equipped Les Paul reveals a whole new world of sound, too; think Reverend Billy F Gibbons on “LaGrange.” 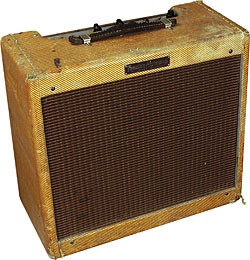 Packaging for the ’57 Amp includes a sturdy nylon micro-fiber-lined slip cover, a batch of Fender 346 picks, and a leather-covered folio, all adorned with a logo that matches that on the amp. The folio contains slip cards featuring artist renderings of the design process, and notes from Green, D’Amato, Nicholas. There’s also a DVD that discusses the amp and the design in interviews with all three.

So, what’s the point with the ’57 Amp? Is it Fender showing the world of indie/boutique amp builders what it can do? Or simply showing its capabilities when budget isn’t an object? Proving it can slip out of its shell now and then? Whatever, given that Fender built “only” 300 of them, certainly they are implying that the market will see it as collectible. Time will tell. But until then, it’s one hell of a fun retro trip!