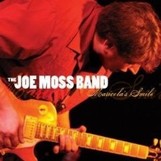 Joe Moss is a veteran bluesman who expands the palette a bit here. The 13 cuts are not standard three-chord fare, and various other forms of music are sprinkled into the mix.

“Suburban Glory” starts as a funk rocker but uses jazzy changes on the bridge before Moss wraps it up with a big wah solo. “Green Eyes” is a somewhat jazzy march and gives Moss a chance to show off his B.B. King-influenced solo chops. The title cut is a ballad with jazz changes that does the same. Soul music never seems far from the music either on cuts like “I Am Feeling You” with its after-hours feel and clever changes; Moss provides a soulful solo full of pinched notes that fit perfectly.

While most of this album leans toward jazz, soul, and blues, Moss covers an underrated rock classic in Free’s “Fire and Water.” And he more than does it justice, with a biting tone and fat solo. The record also features one live cut, and it’s a doozy. Clocking in at over 17 minutes, “Ain’t Got No Money” gives the band a chance to stretch. James Brown-style funk gives way to a jazzy feel before Moss brings it back together with several solos.

Moss may not be a great singer, but his affinity for this style of music is more than adequate. It’s good to hear him expand a bit.