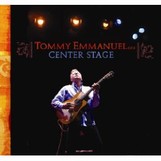 A Tommy Emmanuel concert is such an enthralling experience, any studio effort is almost doomed to suffer by comparison. He’s such a commanding performer – bursting with energy but completely at ease; throwing in Victor Borge/Chico Marx tricks; projecting to and connecting with every member of the audience – the fact that he’s one of the greatest pickers in history is only part of the bargain.

The question becomes, “Why should he record anything but live albums?” And other than the possibility of dueting with another instrumental giant or engaging in technological experiments, it’s hard to come up with an answer. It’s not like he’s going to make a mistake, after all.

This two-CD set was captured at the Sierra Nevada Brewery in Chico, California, and the excellent, crackling sound quality puts you front and center. The repertoire is mostly familiar to Emmanuel fans – standards like “Georgia On My Mind,” some Merle Travis, his melodic “Mombasa” (with “drum” solo courtesy Tommy – beating on his well-worn Maton acoustic), the Knopfler-esque “Old Town,” his famous Beatles medley (where he plays lead, rhythm, and bass parts simultaneously) – with four new originals thrown in.

As a vocalist, Emmanuel isn’t going to put Merle Haggard out of work, but he’s got an unassuming, personable delivery that adds to the intimacy of his show. However, the addition of Bob Littell’s harmonica on four songs is at least two (maybe three) songs too many.

The highlight is the eerie “Initiation,” in which Emmanuel seemingly summons thunder and lightning in telling (instrumentally) the story of an Aborigine boy’s passage into manhood. It’s as visual as it is musical, but just hearing it on CD is still mesmerizing. The good news, though (regarding it and the whole set), is that this same show was filmed for an upcoming DVD!