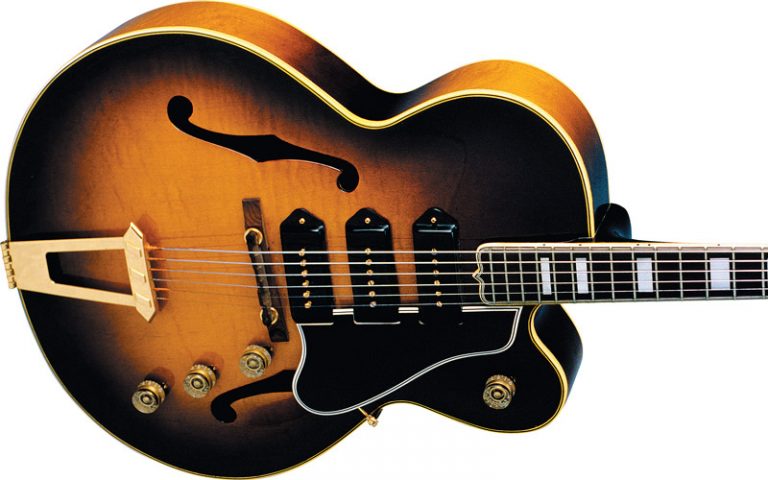 Gibson, like all American guitarmakers, had to shut down electric guitar production for three years during World War II. But when production resumed in 1946, Gibson made up for the lost time with a flurry of innovations. The culmination of this effort was the be-all, end-all of electric guitar design in 1949 – the ES-5.

Then, as now, the ES-5 is easily identifiable by its three pickups, but that is only one of many elements that, when taken together, made a statement to the guitar world that Gibson recognized the electric guitar as an established part of our musical culture and, moreover, that Gibson was fully committed to the electric guitar.

It hadn’t always been that way. Gibson’s first standard-style or “Spanish” electric, the ES-150 of 1936, was a plain and inexpensive instrument. Without the pickup, it looked like it had started as an L-50, with a 16-inch body width and dot inlays. From the back it looked cheaper – like an outdated L-50 with a flat back. Gibson’s top acoustic archtops at the time were 17″ and 18″ wide and had fancier inlays than the ES-150’s pearl dots. Granted, the essence of the ES-150 – the “Charlie Christian” pickup – was better than most of the competition, but the guitar itself was a tentative, low-risk entry into the market.

Gibson upgraded its electric line in 1939 with the fancier 17″-wide ES-250 and replaced it with the ES-300 in 1940. Gibson was also busy developing new pickups, and the unit on the ES-300 had six height-adjustable polepieces (a concept Gibson borrowed from Epiphone) housed in an attractive oval piece of tortoiseshell celluloid. In the meantime, however, Gibson had elevated the L-5 and Super 400 acoustics with cutaway versions in 1939. When World War II stopped electric production in 1942, no Gibson electric was available with a cutaway, which seemed to make the statement that Gibson didn’t consider electric guitarists accomplished enough to need a cutaway guitar.

Gibson began the post-war era by increasing the body sizes of the ES-125 to 16″ and the ES-150 to 17″. A change to laminated maple bodies (pre-war models had solid spruce tops) was a bit of a downgrade, but it also indicated Gibson’s awareness that traditional acoustic construction was not critical to the performance of an electric guitar. The biggest improvement in the post-war models was a new pickup – the P-90, which today remains an industry standard for single-coil pickups.

In 1947, Gibson introduced a cutaway version of the ES-300 called the ES-350. A year later, both got a second pickup – a feature no other maker offered. The control system featured individual pickup volume controls, with knobs in the usual place on the lower treble bout, and a master tone control on the upper treble bout.

In ’49, the year Epiphone introduced its first two-pickup guitar, Gibson left the field in its dust by introducing the ultimate electric guitar – the ES-5. The name alone served notice that this was not just another model in the same series as the 125, 150, 300, and 350. Where the existing models had been named for their approximate price points, the ES-5 was named for Gibson’s legendary acoustic L-5. The ES-5 was aesthetically similar to the L-5, with a 17″ cutaway body, multi-ply top binding, bound f-holes (except for a few early examples that were unbound), bound fingerboard with heart-shaped end, mother-of-pearl block inlays, bound peghead and gold-plated hardware. There were some differences, to be sure, including a laminated maple body on the ES-5 compared to solid maple and spruce on the L-5, a fancier tailpiece and fancier tuners on the L-5, a “crown” peghead ornament on the ES-5 rather than the L-5’s flowerpot, and a rosewood fingerboard instead of ebony. But the overall look of the ES-5, together with its Style 5 model designation, was enough to elevate it into the upper echelon of Gibson models.

The feature that put the ES-5 over the top was, of course, its three P-90 pickups. Its control system was the same as that of the ES-350, with individual volume controls on the lower bout and a master tone control on the cutaway bout. At a time when two-pickup guitars were still a new concept, the idea of preset controls for each pickup was several years in the future, and the ES-5’s system offered the most simple and effective way to blend the pickups for a variety of tones. Gibson priced the ES-5 at $375 for sunburst finish and $390 for natural, which were the same prices as the acoustic non-cutaway L-5s.

The electric guitar world would take off in a new direction after the introduction of Fender’s solidbody electrics in 1950, but Gibson continued to enhance its hollowbody line by adding two pickups to the L-5 and Super 400 in 1951. With their solid-wood bodies, the L-5CES and Super 400CES (Cutaway Electric Spanish), were more expensive than the ES-5, but the ES-5 remained the only model with three pickups.

With the Les Paul model of 1952, Gibson introduced a new control system with individual tone and volume controls, and a three-way switch so the player could select pickups individually or together. The ability to switch pickups as well as volume and tone settings at the click of a switch was a definite improvement over the ES-5’s system. Three pickups were more complicated to deal with, since six settings would be required to offer each pickup individually and in each possible pairing, but Gibson came up with a compromise – a four-way switch that offered each pickup individually or all three together. The four-way system debuted in 1955 and was celebrated in a revised model name: ES-5 Switchmaster. The new version featured six knobs on the lower treble bout (volume and tone for each pickup) and a prominent four-way slide switch on the cutaway bout. Curiously, when Gibson introduced a three-pickup Les Paul Custom in 1957, it retained the three-position switch, with a more limited selection of pickup combinations.

The ES-5 Switchmaster kept up with the times, receiving Alnico V pickups (single-coils with rectangular polepieces) in 1955, then humbuckers in mid ’57. In 1960, along with the L-5CES and Super 400CES, the cutaway was changed to a flashier Florentine pointed style. Through the 1950s, Gibson sold as many ES-5s as the L-5CES and Super 400CES put together, but in the end, three pickups proved to be overkill. (For some noted players, such as Herb Ellis and Wes Montgomery, even a second pickup was extraneous.) Gibson shipped 55 ES-5s in 1961, and then cut it from the line. Gibson’s Custom, Art & Historic division reissued the early version (with P-90s or Alnico V pickups) and the Switchmaster version in 1996 and still offers the Switchmaster.

Vintage ES-5s represent a historical highlight in Gibson’s hollowbody electric guitar development, but they don’t get the respect that their position would seem to deserve. And Switchmasters, particularly those made from mid ’57 onward, are sadly being cannibalized for their PAF humbuckers and other electronic parts. There may be bigger, better, or more valuable guitars than the ES-5/Switchmaster, but it is still in a class all its own.