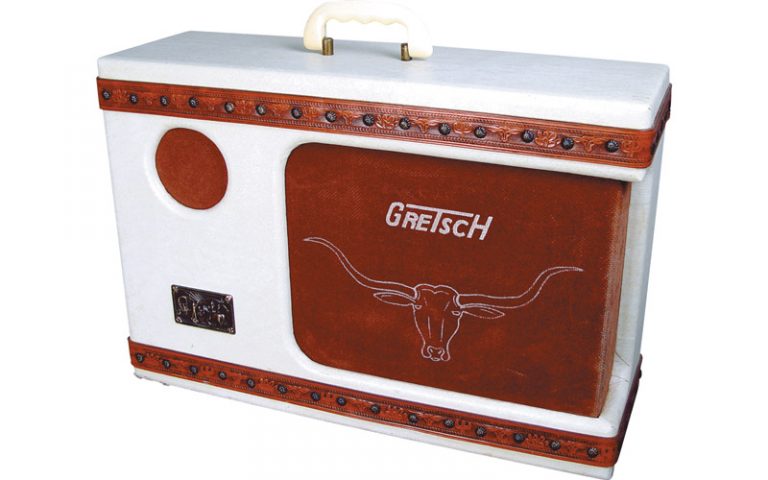 Any significant brand that offered a lap steel or electro-Spanish model in the early days of rock and roll also needed to offer an amp in order to make a “set” or “combo” out of the package – an obvious strategy from the marketing department’s point of view – and by the mid 1950s Gretsch was one of the hottest names in electric guitars. Trouble was, the hallowed Brooklyn instrument maker didn’t have its own amplifier production facility, so it did what plenty of others before and after it did when it turned to Chicago OEM supplier Valco to provide a range of spiffy-looking amps to partner its bodacious guitars.

Valco was formed in the early 1940s out of the remnants of the National Dobro company, which had been transplanted from California to Chicago in the mid 1930s by legendary resonator-guitar manufacturer Louis Dopyera. Named for the first initials of its owners at the time (Victor Smith, Al Frost, and Louis Dopyera, plus “co” for “company”), Valco was soon cashing in big time on the Hawaiian music craze’s shift from acoustic in the ’30s to electric in the ’40s, and supplied lap-style instruments, amplifiers, and even plenty of standard six-strings that were sold under the Airline, Oahu, Supro, Danelectro and National and other names. While Gretsch was doing just fine making its own guitars, the Valco products fit the bill very nicely for that critical second half of the “combo,” and wearing the well-considered Gretsch look and logo, they came out arguably the coolest of all the amps to roll out of the Chicago plant.

Even in the standard dress given the 6160 and 6161 models that accompanied many Gretsch guitars in the mid 1950s, these amps still looked damn spiffy. But swaddle them in the ivory mock-leather, burgundy wraparound grillecloth and tooled leather trim of the 6169 Twin Western version, and the work-a-day Valco was transformed into a total knockout. This amp was partner to the original 6120 Chet Atkins Hollow Body and 6121 Chet Atkins Solid Body models introduced in 1954, and the 6130 Roundup Solid Body of the same era, and shares the Western motif regalia which Atkins objected to from the start (and eventually had removed from his signature guitar). You can clearly see the links between the longhorn steer on the grillecloth and the guitars’ headstocks, and the “cow and cactus” tooled-leather trim on both the amp and the sides of the two solidbody guitars. And if you’ve ever seen an original hardshell case from any of the early Chet models, it’s like encountering a twin that was separated at birth from the 6169 amp.

Despite the trendsetting looks (or should that be “trendstopping”?), the 6169 was an extremely basic amp inside, even for its day. This was one of the company’s flagship models, intended to accompany what was arguably Gretsch’s most important guitar line to date, and yet it only put out about 14 watts and carried minimal tone-shaping facilities, all housed in a rather archaic vertically mounted chassis. The amp carried three inputs – two Standard and one Treble – but all went to the same gain stage formed at one side of a dual-triode 6SC7 octal (8-pin) preamp tube. A simple treble-bleed network formed the amp’s lone Tone control, then it was on via the shared Volume control to a 6SC7 phase inverter and through a pair of 6V6GT output tubes to a field-coil speaker configuration (these amps – and similar – were also later offered with 6L6 and 6973 output tubes). Power conversion came courtesy of a 5Y3 rectifier tube. All in all, the tube complement is not unlike Fender’s Model 5C3 Deluxe of the early ’50s, which is also cathode-biased like the Gretsch/Valco, yet the amps sound quite different. Side by side comparison shows the Fender circuit to have been somewhat more advanced, even at that early stage in the company’s existence, and the Deluxe ran its 6V6s at slightly higher voltages while giving the amp larger electrolytic capacitors in the power supply, resulting in a bigger, fatter sound. Leo had also long ago abandoned cumbersome field-coil speaker designs. And while we’re there, dig this for a speaker configuration: the 6169 (and many of its siblings) carried two elliptical 6″ x 11″ speakers plus a 4″ tweeter. Basically, it spec’d out like many tube gramophone units of the day.

The 6169 Electromatic Twin Western did have one thing over the early Fender amps, though – tremolo. Certain models of Valco-made amps had offered tremolo for a few years by the time Fender’s first effects-carrying amp, the Tremolux, arrived in the summer of 1955. Of course, the Fender version had both Speed and Depth controls, rather than the single, unspecified rate/speed control on this Gretsch’s groovy yet somewhat antiquated control panel. All of its shortcomings and near-obsoletisms aside, this hunk of kitschy cowboy couture really can sound damn cool when you jack in and crank up. For many players familiar with Fender’s version of the sound at the heart of electric guitar music from the ’50s, plugging into a Gretsch 6169 or the near-identical 6160 or 6161 can feel like discovering one of the missing links of rock and roll. It has gritty, biting highs, growling mids, round and soft-ish (but pleasing) lows, and a slightly rubbery compression that really enhances its touch sensitivity. Addictive stuff.