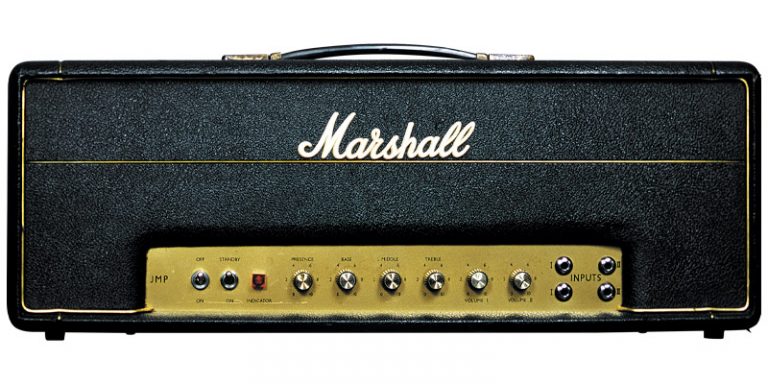 Kids wanna rock? Plug into your plexi and bow to the mighty crunch. Marshall amps of the company’s first 10 years are interesting for having thrown up classics of different eras – from the original JTM45 to the plexiglass-panel JTM50/JMP50 of 1966-’69 (from whence the “plexi” nickname is derived) or the metal-panel JMP50 of 1969-’72 – that all bore the Model 1987 Lead Amp designation, despite some significant changes. As hallowed as the 1962-’66 Marshalls might be, and as desirable as those later metal-panel heads might still remain, the late-’60s plexi is undoubtedly the pinnacle of Marshall amps for the rocker and typifies what we think of as “the Marshall sound” more than any other product the company has ever produced. Let’s take a look at a gorgeous plexi-panel JMP50 from around 1968, by which time the archetypal plexi formula had been firmly established.

That’s “despite some significant changes” even if analyzed against the big picture these changes might appear relatively slight; or at least far less significant, say, than the changes wrought by Fender between the tweed Bassman of 1960 and the blond Bassman of 1960/’61, or by Gibson between the Les Paul of 1960 and the Les Paul/SG of ’61. This is mainly because, despite being a very different-looking amp, the JMP50’s circuit is still a direct descendent of the circuit found in the 5F6A tweed Fender Bassman of 1958-’60, upon which Jim Marshall based his original amp, the JTM45. The plexi still had many significant elements that helped form the way the tweed Bassman did business, including the three-knob cathode-follower tone stack, Presence control, long-tailed-pair phase inverter, and a class AB output stage in fixed bias with a negative feedback loop to tighten up the performance. Poke your nose inside the chassis of the two – figuratively, please – and the component layouts are still virtually identical, aside from the mounting positions for the tubes. But the changes from JTM45 to JMP50 are certainly more impacting on this amp’s performance than those from 5F6A Bassman to JTM45, and while indeed relatively few in number, are indeed “significant.”

The most obvious evolutionary trait, and the one most amp fans will point to first, is the move from the 5881/6L6/KT66 output tube types of the JTM45 (and Fender Bassman) to European EL34 tubes, bottles that became synonymous with British rock tone from 1967 onward. Not only did these tubes yield the now-famous Marshall crunch tone, the sound that helped define the genre, they could be driven at higher voltages to provide that louder amplifier that players were demanding, even in its “smaller” 50-watt version… an amp that could actually put out around 60 watts when pushed. Despite the higher power, EL34s also compressed and broke up a little more quickly, and some would say more sweetly, than 6L6-types in a similar circuit. That gritty, chewy, slightly crispy sounding EL34 grind is a standard of the heavy rock sound that was clearly established by Marshall, and has been emulated by countless manufacturers ever since.

Perhaps the next most obvious change from Bassman/JTM45 to “Plexi” was the move from GZ34 tube rectifier to solidstate diode rectification. Early plexi-panel amps still wore the JTM prefix, but their rating was bumped up to 50, although for a time they simultaneously carried EL34s and a tube rectifier. In ’67, however, the company name evolved from Jim and Terry Marshall to Jim Marshall Products, and the initials on the panel were changed to reflect that. Ramping up the DC voltages to the EL34s in a cranked plexi requires yanking a whole lot of current through the rectifier (where AC from the power transformer is converted to the DC that lets the tubes do their thing) and would result in a lot of sag in a tube rectifier, creating a delayed note response and mushy playing feel at high volumes. Solidstate rectification took care of that, so while the rectifier isn’t in the signal chain, it still contributes in a very real way to the sound and feel of the amp. This change made the Marshall bolder and punchier, and helped to shape it into a better high-volume amp for rock lead playing. To further tighten up the low end, the big filter capacitors in the power supply were also upped from 22uF caps to 50uF caps, a value increase that partnered well with the move to solidstate rectification.

A less obvious alteration in the plexi is found at the first preamp tube. Unlike the tweed Bassman and JTM45, the two triodes of the ECC83 (aka 12AX7) are now individually biased, which means each channel can be more independently voiced. The change allows Marshall to use a different bypass cap around the cathode-bias resistor of one side to create its notoriously crunchy bright channel (a .68uF cap). The spec bypass cap for the other channel is 320uF, for a rounder, warmer sound. Note that Marshall had already upped the gain at this stage in the JTM45 by using the higher-gain ECC83/12AX7 instead of the mellower 12AY7 found in the Bassman. Also, because you could easily “jumper” these two channels together by running a short cord from the 2 input of the channel you’d plugged into to the 1 input of the other, you could blend the two as desired for some serious bang from this relatively simple preamp stage.

Trace a 1968 plexi in detail and you’ll find a few other minor changes, but these three outwardly simple alterations – and all the implications that go with them – are the biggies. Between them they account for what really is an entirely different amp from the Marshall flagship of two years before. Belt it all through a closed-back cab (or two) with four Celestion G12M Greenbacks, or the bass-intended version of the G12H-30 that Jimi Hendrix favored, and you’ve got some serious rock action on tap. This is the sound not only of Hendrix, but of Jimmy Page, Paul Kossoff, Cream-era Eric Clapton, Eddie Van Halen, George Lynch, and so many others we could list them into tomorrow. Tap it, and feel which way the wind is blowing.