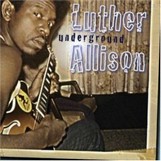 When Luther Allison died in 1997, he was 57 years old – and just hitting his stride.

Allison grew up in Mississippi and Chicago, playing the blues with many of the greats. He was of a younger generation, inspired equally by the blues establishment of Muddy Waters, the new West Side Soul revolution, Buddy Guy’s pyrotechnics, and Hound Dog Taylor’s gutbucket slide. Then, he moved to Paris, where he became a French blues hero before several of his 1990s albums – such as his ’94 masterpiece Soul Fixin’ Man – brought him belated stardom back home.

Now, Allison’s guitar-toting son, Bernard, has uncovered tapes of what may be his father’s first sessions. Underground collects these 1958 one-take demos, and the result is an instant classic for Luther fans.

At the time, Allison was just 18 and playing guitar behind bandleader/vocalist Bobby Rush, a more-experienced 25-year-old. With Rush’s support, they went to Chicago’s Wonderful Records studio late at night when the price was right and cut a series of demos. The songs were played live with the tape rolling through the session; they did most tunes in one take. Though intended strictly as demos, the songs could – and perhaps should – have been released. The disc kicks off with “Hide Away,” Allison’s take of a Hound Dog Taylor tune cut two years before Freddie King made it a hit. Allison plays it hot – and with humor. His guitar work is sure – he’s 18, ready to conquer the world, and he rarely misses a beat even if at times he lacks the confidence and power he’d display in the ’90s.

If you’re a Luther Allison fan – or a fan of any sort of classic Chicago blues – this is a must.


This article originally appeared in VG‘s Apr. ’08 issue. All copyrights are by the author and Vintage Guitar magazine. Unauthorized replication or use is strictly prohibited.

Leslie West – Blues to Die For