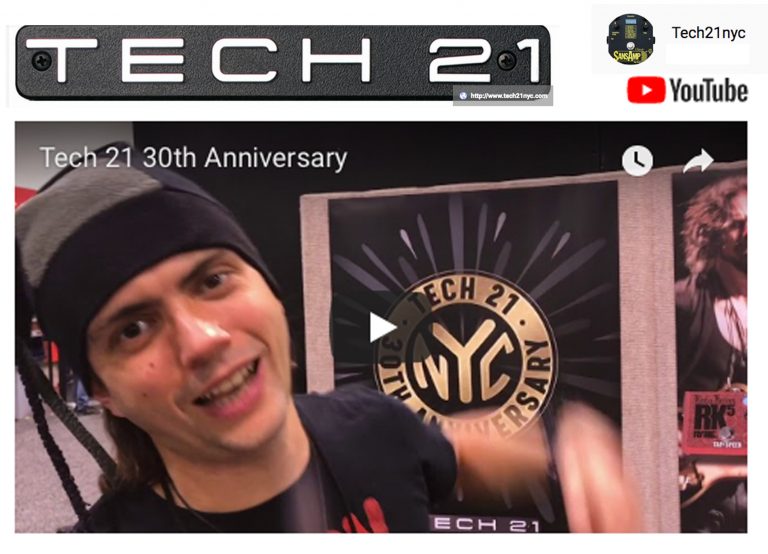 Tech 21 has released a compilation video for their 30th anniversary. According to Dale Krevens, Vice President, “While we’re very serious about our products, this is a celebration and wanted to have some fun. The video features a variety of artists and business associates speaking pretty much off-the-cuff about Tech 21, including a few bloopers sprinkled throughout.” 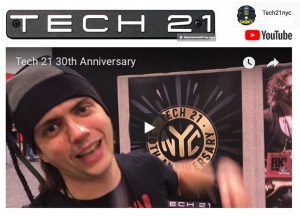 Krevens continued, “It’s hard to believe the company is 30 years old. And I’m amazed how long we’ve had partnerships with our distributors and artists, some being 20 years or more. It’s even more amazing how so many grew into true friendships. We are also fortunate to have a very low turnover of employees. A handful that started early on eventually retired from here. We are so thankful for having such incredible long-term relationships.”

In 1989, B. Andrew Barta’s ground-breaking invention, the original SansAmp (later dubbed the Classic), pioneered tube amplifier emulation and the direct recording movement. It was, in fact, responsible for creating an entirely new category of signal processing. Ironically, Barta never actually intended to become a manufacturer. After trying to sell his technology to major manufacturers and being consistently turned down, Barta formed Tech 21 and set out on his own. The rest, as they say, is history.

Over the years, Barta hasn’t stopped pumping out innovative designs. Most recently, in 2014, the Fly Rig 5 proved to be a true game-changer. Its success spawned an entire line of Fly Rigs in various flavors, as well as signature artist models for Richie Kotzen and Paul Landers of Rammstein. Featuring all-analog SansAmp circuitry, each version is a self-contained “rig” in a tiny footprint. Players can slim down without sacrificing great tone, and travel without fear of baggage surcharges and dreaded mystery backlines.

Barta’s technology stands alone in the analog domain, a domain to which he remains loyal. According to Barta, “Analog has infinite resolution, so it’s naturally warmer. Plus, there’s no latency. Latency can be barely audible, but you can still feel it. I also find analog to be more reliable. And you never need to reboot after a power failure!”