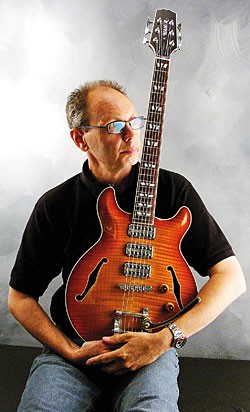 When the Hamer Standard first appeared in an unassuming black-and-white ad in a guitar magazine in the mid 1970s, most readers weren’t sure what to make of it. Shaped like a Gibson Explorer and finished like a late-’50s Les Paul Standard, the Hamer was unlike anything guitarheads had ever seen.

It’s difficult to argue the point that the Illinois-based Hamer company, which started as a vintage guitar shop, was at the forefront of what Jol Dantzig’s present-day design company calls the “creation of the ‘Modern Vintage’ boutique guitar niche market.” Along with partner Frank Untermeyer, Dantzig created and marketed innovative and eyecatching instruments that epitomized the term “retro-vibe.”

“We were dealing with the top players,” Dantzig recently told VG. “And prices had climbed to where we thought it would be too insane to take a museum-piece guitar out on the road, where it could be broken or stolen. So our idea was to create a vintage guitar alternative – something a pro could play that would have the look, feel, romance, build quality, and sound of a vintage guitar.”

Other cutting-edge Hamer designs over the years included the first electric/acoustic hybrid (the Duo-Tone), and the first 12-string bass. But Dantzig is most proud of the concept of what Hamer guitars represented in the marketplace.

“When we came out with the Standard, it was half the price of a vintage guitar, but almost twice the price of the most expensive new Les Paul. So in one fell swoop, we not only created the ‘custom shop’ or ’boutique’ concept, we also threw ourselves into a more exclusive [market] than brand new mass-produced guitars.”

Hamer was sold to the Kaman Music company, owners of Ovation and other brands, in 1988. Dantzig and Untermeyer stayed on, and the Hamer factory in Arlington Heights, Illinois, remained open. In the early ’90s, Dantzig moved to northern California and served as a consultant to Kaman and other musical instrument companies.

“I got involved in websites and internet content,” he detailed. “It was a full-blown graphic design company. We did newsletters, instruction manuals for companies like Nady, Modulus-Graphite, Chandler, EMG… Mesa Boogie was a big client. We worked outside the musical instrument field, as well, with electronics and publishing companies. Of course, my love is guitars and motor sports, so those are my two primary areas of function; I get involved in those on a wider level.”

In the late ’90s, Dantzig relocated his design company to Connecticut, home state of Kaman, in order to strengthen his relationship with Hamer. 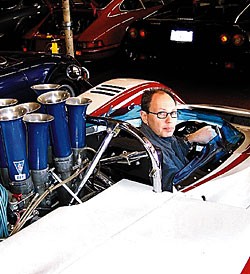 Dantzig spending some QT with a few more of his favorite things.

“Frank had been running Hamer in Chicago, and Kaman promoted him to general manager at Ovation in Connecticut. So he was commuting. It was then decided that all of the operations would be consolidated in Connecticut, and we had space at the Ovation ‘campus.’ Hamer moved into that space, and Frank called and asked if I would help tidy things up.”

Dantzig noted that Hamer had increased in size by the time he moved to California, and that the company was all over the map concerning instrument styles.

“We weren’t as focused as in the beginning, and certainly not as focused as we are now. When we moved to Connecticut, we reduced the size of our shop by two-thirds and kept only the top 10 people. We moved into a smaller shop, which makes it much more like the beginning – only better.”

Asked about any favorite models that have been designed and marketed since his reaffliation, Dantzig said, “The guitar I’m really proud of now is the Monaco III, and the new Monaco Bass. I also love the Newport, which we introduced in ’99 – our first proper semi-hollow. And there’s the Improv archtop. We wanted to build the Improv from the very beginning, but felt it necessary to take certain steps leading up to it. The public thought of Hamer as a hard-rock/heavy metal guitar builder, and rather than jump full-blown into a jazz guitar, we took baby steps. That’s why we started with the Newport and all of its variations.”

These days, Dantzig also conducts seminars at Hamer dealerships, which he calls the “Guru Tour.”

“It’s one part guitar-building clinic, one part history lesson,” he detailed. “We felt that there are a lot of people who are interested in guitar construction and the history of how it developed. It kind of grew out of our open house; once a year we’d let the fan club in, and I’d give a presentation. Last year, Tom Wheeler was our special guest. He helped explain how the guitar business got to where it is now, and it dovetailed nicely with the history of Hamer. I realized a lot of people didn’t know that story, so we thought it would be fun to go out and visit dealers, and support the people who are supporting us. It gives people who haven’t been exposed to Hamer a look at where Hamer came from, but it’s also an overview and celebration of guitar history; it’s not 100 percent about Hamer.”

The Hamer facility today maintains a custom shop vibe, and Dantzig notes the size of Hamer’s production area is still smaller than the custom shops of many major manufacturers, much less said manufacturers’ mass-production facilities. In his mind, Hamer has flown under the radar for decades, and is still working to design and create innovative professional-grade instruments in today’s market, just as he was doing in the 1970s.

This article originally appeared in VG‘s November 2005 issue. All copyrights are by the author and Vintage Guitar magazine. Unauthorized replication or use is strictly prohibited.