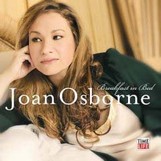 In other hands, Osborne’s penchant for jumping from genre to genre could peg her as a dilettante. But she’s just so good at everything she tackles – her 2006 Nashville CD, Pretty Little Stranger, touring with the Dead, fronting Motown’s Funk Brothers – you can’t wait to hear what she’ll do next.

Here, she dips into ’70s Philly soul, in an album of half originals, half covers. It’s a stronger effort than her 2002 album, How Sweet It Is, which was all covers and encompassed everything from Otis Redding to Jimi Hendrix to The Band.

Cover albums are often a stopgap measure when an act can’t come up with any good new material, but Osborne’s own compositions on Breakfast (the beautifully melodic “Alone With You” and the wrenching “Heart Of Stone”) are as strong as the covers. Which is saying something, because her renditions of Hall & Oates’ “Sara Smile” and Bloodstone’s “Natural High” are as good as the original versions.

“I Know What’s Going On” features a Stonesy/”Miss You” type of groove, while “Eliminate The Night” could have been a hit for Bobby “Blue” Bland in his prime. That they don’t merely fit in with but stand out alongside the Stylistics’ “Break Up To Make Up” and the Manhattans’ “Kiss And Say Goodbye” is a testament to Osborne’s nonpareil instrument (her voice) and her artistic sensibilities.

And just as Osborne chooses a subtle, nuanced delivery where others would resort to histrionics, guitarist Jack Petruzzelli is the picture of good taste. Like the respect Osborne shows for the genre, he pulls out the Coral Electric Sitar or employs wah where appropriate without smacking of mere nostalgia.

A worth-admission bonus: Osborne’s two live turns with the Funk Brothers that stole the show in the documentary Standing In The Shadows Of Motown – “Heat Wave” and “What Becomes Of The Brokenhearted” – are included.


This article originally appeared in VG‘s Aug ’07 issue. All copyrights are by the author and Vintage Guitar magazine. Unauthorized replication or use is strictly prohibited.
The New Gear Yearbook