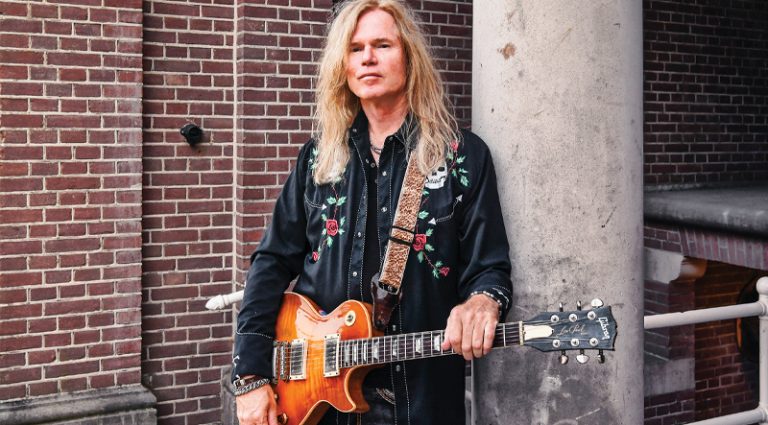 If you played rock guitar in the ’80s, you likely paid attention when Vandenberg videos/songs played on MTV or the radio. The Dutch band recorded three albums that put guitarist Adrian Vandenberg on the map with a mix of spine-tingling neoclassical chops and accessible ’80s hard rock. He later joined David Coverdale’s Whitesnake in time to record the lead on “Here I Go Again” (the only guitar part on the band’s self-titled fifth album not recorded by John Sykes) then co-wrote Slip of the Tongue while becoming half of a great guitar duo with Steve Vai.

While making MK II, did you have particular expectations?

It felt like the very first demo I recorded on a cassette, really. I pour my heart and soul into the music. You throw it out there and hope people like it as much as you do.

Your guitar tone is right on with the musical style.

I’m happy to get back to my organic sound with my Les Paul straight into a Marshall. I wanted the root to be firmly in the ’70s, but building a bridge between then and now. The first album was a statement to sound like it was in a small club, with the listener sitting right in front of the stage. On the second album, I wanted the sound of our live show.

It must feel good to tour with a larger body of work.

With the first album, we hadn’t done any gigs. Now we’ve done quite a number of them – played all over the place but, unfortunately, not in the States. I wanted the second album to sound like it would when you’re sitting in the middle of the band. No pedals or anything in-between – just my Les Paul with everything turned up. There’s a reason people keep going back to Led Zeppelin, Free, and early Cream records – spontaneity and dynamics in the studio were captured on tape. After that, rock music became formulated. I wanted to get away from that, and you can hear it on the tracks.

The outro solo on “If You Can’t Handle The Heat” is absolutely killin’.

Originally, I was going to let it fade, but it turned out so well that I left everything on there. I thought, “Man, this is the first time in my career that I jammed on my own record.” It was an interesting end to the record because I was fiddling with my toggle switch, like what Hendrix would have done.

The band mixes your vast experience coupled with these young guys for inspiration.

We have an incredible chemistry, which you can’t buy. I’ve always liked a “band” feeling. Sem and Mart are incredibly talented. Jan… in the U.S. he would have been kidnapped by a bigger band (laughs). I feel very fortunate that I ran into these guys.

Which guitar are you using?

It’s a Les Paul Heritage I bought new in 1980. I used to look through the window in guitar shops but they wouldn’t let me in because they knew I couldn’t afford it. I saved the money by working in factories and it’s been with me all over the world except when I was in Whitesnake.

I took a train to Amsterdam to get that guitar and was extremely lucky because it’s unusual, with a very beautiful top. It has been relic’d by my own sweat and blood. I have other Les Pauls, but this one is my faithful mistress who gets better with age.

We keep in touch and we’re very good friends. We have a plan to do something sooner or later – a blues album, something acoustic, or just writing.

Will Moonkings play the U.S.?

I really want to. The last time I toured the States was with Whitesnake in ’94. I get lots of mail from American friends asking, “When are you going to play here again?” It’s wonderful to hear from people who are touched by what you do.