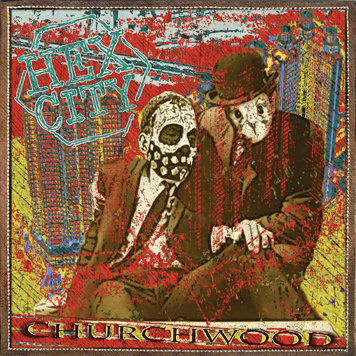 It’s not every band that has a lead singer who has published three books of poetry and whose literary criticism has appeared in The Encyclopedia of American Poetry: The Twentieth Century. In addition, Joe Doerr teaches English at St. Edward’s University in Austin and is a member of the LeRoi Brothers with older brother Steve Doerr.

So it’s not surprising that his quintet, Churchwood, describes its music as “poetry-driven, alternative blues-rock.” The guitar tandem of Bill Anderson and Billysteve Korpi might churn out Bo Diddley or Howlin’ Wolf riffs Captain Beefheart would be proud of while Doerr spits out a stream of lyrics like Tom Waits without the gravel and occasionally blows a mean harp.

Literary references pop up, as in “One Big White Nightmare,” populated by Tashtego and the rest from Moby-Dick. The music is challenging, often hypnotic, usually undanceable, but occasionally actually radio-friendly. “Original” is an understatement.